The Eastern Cape Karoo village of Nieu-Bethesda knows how to put the fun into fracktivism.

Every time there’s an anti-fracking gathering in this settlement in the Sneeuberge, you can be sure of a bonfire being lit or a selection of snappy posters being borne by locals from the inner village and the outlying township of Pienaarsig.

So last weekend’s demo march in Nieu-Bethesda was a lot of fun for everyone, including Jonathan Deal, who started up the anti-fracking Treasure the Karoo Action Group (TKAG) in 2011.

Much of his time is spent in a suit and tie, in boardrooms, meeting with lawyers, politicians or tedious people in the oil and gas industry. In fact, the third week of September was particularly thick with meetings around shale gas.

Graaff-Reinet lawyer Derek Light had been reporting back on developments to landowners worried about fracking in Middelburg, Murraysburg, Cradock and his own home town. Shell was doing its own presentations, in Laingsburg and Somerset East.

But Saturday in Nieu-Bethesda was not one of those suit-and-tie days. The Bethesda Festival was on, and an anti-fracking march had been planned from the community hall in Pienaarsig township to the centre of town.

The children of the Lettie de Klerk Primary of Pienaarsig were terribly excited about it all. There had been anti-fracking poetry reading, and later, prizes would be handed out for the best anti-fracking posters.

Nieu-Bethesda is no stranger to shale gas protests, and there were a few familiar faces that had been seen at the Global Frackdown in 2012, including Pienaarsig restaurant owner Auntie Evelyne Olifant and members of the Sneeuberg Emerging Farmers like Danyl Vywers.

Reverend Sam Zakay of the Camdeboo Council of Churches was also there, along with another well-known face in unfamiliar clothing – former Graaff-Reinet mayor Daantjie Japhta. He had swopped his mayoral chains for furred headdress, colourful beads and a caracal fur slung over his shoulder, there in his capacity as head of the largest Khoi grouping, the Inqua people.

“Want die Khoi is teen fracking (Because the Khoi people are against fracking),” shouted Daantjie, in between bouts of toyi-toying at the head of the group with Jonathan.

The children surged down the hill, and the older protesters struggled to keep the pace. Daantjie Japhta called a halt and got them chanting Khoi songs. There was a brief attempt to get the protesters to chant Phanzi Shell, Phanzi (Down with Shell, Down), but the home language of most people there was Afrikaans, not isiXhosa. Eventually they settled on Voertsek, Shell, Voertsek (Get out of here, Shell) and off they went again, everyone with cameras struggling to stay ahead of the pack.

Once in the centre of town, the protesters turned sharp left and surged into the great white festival tent, where a band called The Brothers had just started their first number, a catchy swing jazz tune. The sound man, who was still tweaking the levels, suddenly vanished in the rising dust as the protest turned into a party. Huldah Eloff van Wyk of the Owl House foundation couldn’t stop smiling.

“Isn’t this beautiful!” she said, as she took pictures.

Jonathan also couldn’t stop smiling. “I could get used to this,” he said as he danced.

The protesters laughed, danced and held their banners high as the band started a reggae number at the crowd’s request and the singer started riffing with the messages on the placards.

The chorus was “Phanzi Shell”, which puzzled a yuppie who’d just walked into the tent. 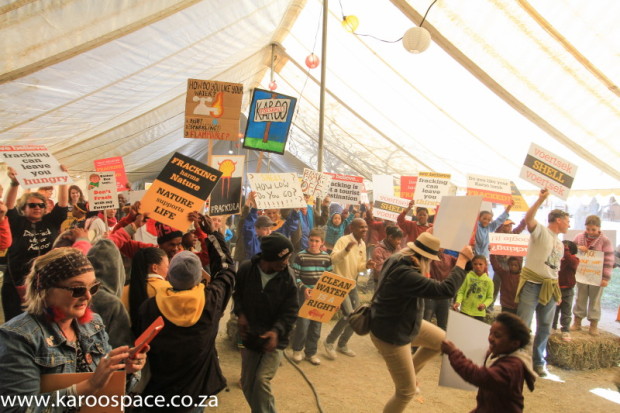 The Future of Shale Gas in South Africa