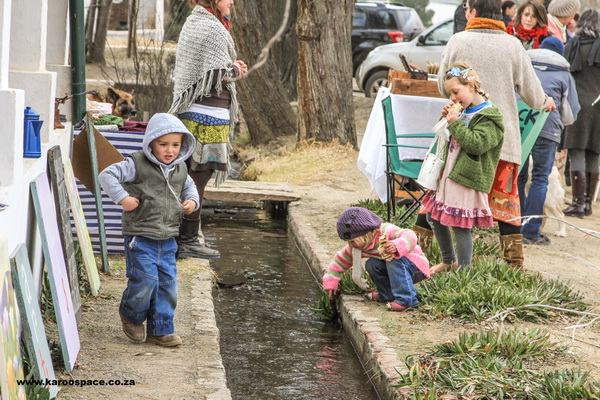 In summer, the familiar rushing sound of the Great Fish River pumping through our home town of Cradock in the Eastern Cape is often punctuated by the excited babble of youngsters as they navigate the gentle rapids on the inner tubes of tractor tyres.

In the late afternoons while pensioners watch their soapies, the kids are playing ball in the quiet streets until the bats start flitting between the lamplights and Mom calls them in for supper. 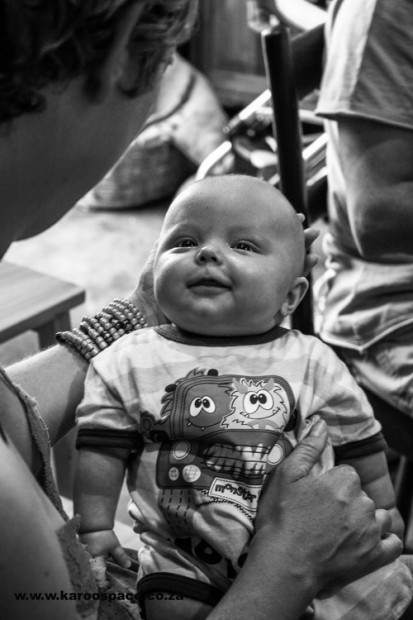 When Dave Ker of Johannesburg and Lisa Antrobus of Cradock married, they chose to start a family in her hometown.

“Out here, children stay children for longer” says Lisa. “There’s no rush to grow up. There are plenty of other advantages too, like how close everything is. We can even nip away from work for a short while to watch our son Matt race on sports days. In less than 20 minutes we can be picnicking in a national park. There’s a lot of extra-curricular stuff here that you probably wouldn’t easily find in cities, like horse-riding and river paddling, and some of it costs only R200 a month.”

Bev Collett, who grew up on a farm outside Cradock, left to work and study in Durban and Port Elizabeth where she met her husband Andre Muller. She still misses aspects of city life, but says raising her two children on the family farm was the right choice for them.

“They grow up innocent and free.  Our kids are always outside, building forts or swimming or climbing trees. I don’t worry when they go for walks in the veld or ride their bikes on the farm roads.

“When city friends visit, I notice their children don’t know how to play outside. They have no clue how to entertain themselves without a smartphone, a tablet or a television screen.”

Bev adds that that another advantage is that excellent remedial teaching is available in the country for a pittance compared to city rates.

“And because everyone knows everyone, teachers are generally more invested and treat the children as if they were their own.”

“In the platteland, teachers and parents tend to know each other outside the schoolgrounds. They meet in the shops or at social gatherings, where an informal chat about a child often sorts out matters easily.” 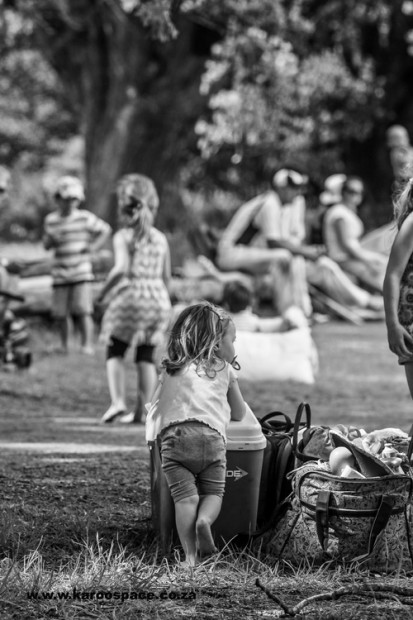 The platteland’s single most valuable gift to parents is far more time with their children.

In 2015, well-known foodies Russel and Camilla Wasserfall were living in Stellenbosch with their three-year-old daughter Amelia.

“We would wake her at six, dust her off a bit, feed her breakfast and get her dressed,” says Russel. “One of us would drive her to playschool then dash off to work. If we could make it through the N1 traffic, we’d collect her around 4pm, sometimes later. We’d barely have time to feed her, bathe her, have dinner ourselves and read to her in bed.”

Then they scoped out Prince Albert village and discovered a remarkable private school. As a clincher, they found a Karoo dorpshuis that was perfect for their needs.

“There’s no rush hour or traffic,” says Camilla. “My child loves being at Albert College. The change in her is amazing.”

Russel adds: “Amelia sings when we walk her to school in the mornings. Same child, different universe.”

Anecdotal and academic evidence shows that country-raised children are more creative than their city counterparts and have healthier immune systems. They are less prone to distraction and more self-disciplined.

Sports coaches often remark that farm children in particular are stronger, better co-ordinated and more agile than their urban counterparts.

Small town children also seem more socially adaptable, especially those who have gone to racially mixed schools. Jurie Taljaard, a parent of two who has taught in Cradock and Grahamstown, says he notices that country-raised youngsters adjust surprisingly well to tertiary education in larger centres. 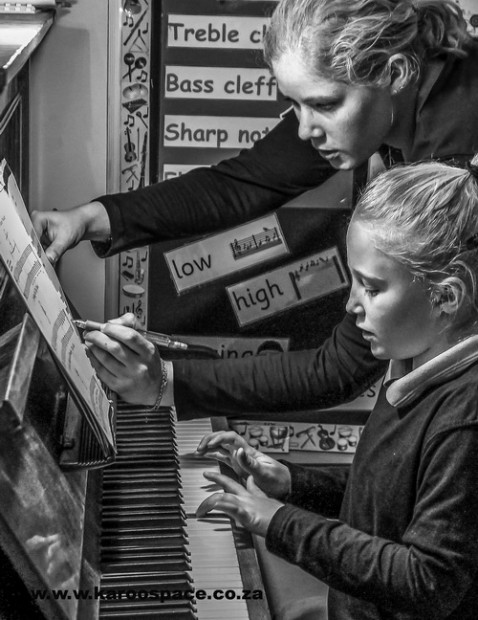 A small private platteland school with caring teachers offering individualised attention can make a world of difference to young children.

“Our teachers prefer classes of 15 and less,” explains Ammie Pringle, teacher, parent and principal of Bedford Country School in the Eastern Cape. “As a result, any problems are picked up straight away.”

From her office you can hear the music teacher busy with individual piano and violin lessons. The smell of garlic and bacon drifts in from the kitchen where children are gathered around a table making pizzas while simultaneously learning about fractions.  Upstairs, a local artist is teaching the Grade Fours and Fives how to make clay cats.

“In a small town like Bedford, we draw on whatever experts are available to offer lessons or activities like art, music, gymnastics or even Xhosa stick fighting.”

A town with effective schools is economically blessed. Parents on farms come in to drop their children and then go on to do their banking and shopping. School events like dances, plays, concerts, athletics meets, tennis tournaments and rugby matches attract parents and friends who stay over in guesthouses.

Teachers are obviously employed, but each school also creates a dozen or more non-teaching jobs, depending on the size.

Schools need transportation and buses, generating jobs for drivers and mechanics. Seamstresses make and repair uniforms. Tutors and coaches are needed to help with certain subjects. Children buy snacks from tuck shops and tea rooms. If there’s a rugby, hockey or squash team, a capable physiotherapist is also needed.

Good schools attract young families to towns, and this brings energy and investment. 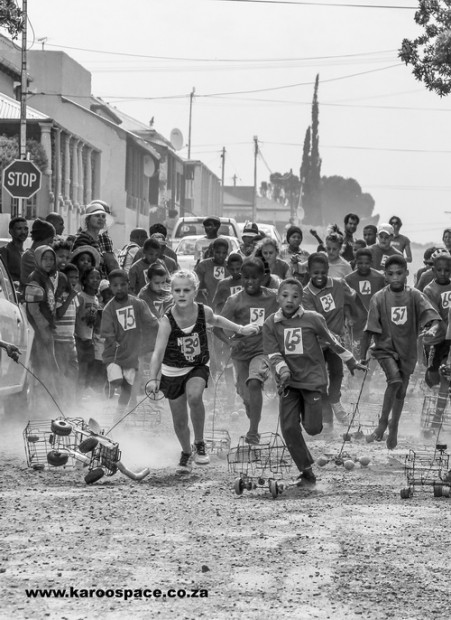 It Takes a Village

If you want to glimpse the best of family life in the platteland, you could parachute in on the weekly tennis gathering at Fish River Station, about 50km north of Cradock.

This is an old-fashioned farming community, the centre of which is the low slung tennis club, wedged between the river and railway siding of that name. In many parts of South Africa, similar social clusters have disappeared or diminished. But here, things still happen as they have for generations. Irrigation from the river allows more intensive agriculture of pecan nuts, lucerne and sheep, so there are also plenty of young farming families in the district.

Generations of farmers have grown up here, with children bonding from toddlerhood onwards.

Around the all-weather courts (people are terribly serious about their tennis here), there is the ebb and flow of dummies, spoegdoekies, nappies, prams and most importantly, advice and support. There are always outstretched arms for a crying child.

Saturday afternoons offer blessed relief for Fish River mothers. They can come together and casually take turns to watch each others’ children. Talk revolves around the latest rains, Caesarean scars, school news, the wool prices, and the perennial subject of whether amber or biltong is best for teething babies.

Meanwhile, kids of all ages run in a small swarm around the club, the hedges and tall trees, the stone Methodist church, then off to a nearby swimming pool. They launch kites on windy days, but they also make up wildly imaginative games with an endlessly evolving script.

You’ll seldom find a child absorbed in a smartphone – not because it’s forbidden, but because it’s so boring compared to real life.

This sounds idyllic, and for a child it is, but there is something more here. An astonishingly high percentage of Fish River children have gone on to become head girls and head boys at some of South Africa’s top schools.

This is an excerpt from Moving to the Platteland – Life in Small Town South Africa by Julienne du Toit and Chris Marais. Buy the Print Book Version HERE and the Ebook Version HERE. 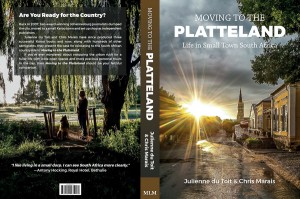 Car Bars, Clubs and Camel Yards of the Karoo

3 thoughts on “Children in the Platteland”