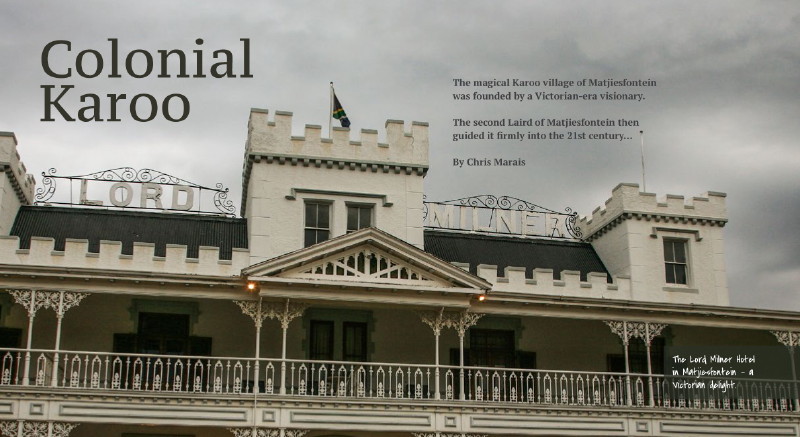 Western Cape, 2008 – The first time you see Matjiesfontein, it should be at midday at the height of a Karoo summer, so it appears like a shimmering mirage of an old Victorian hamlet in the distance.

As you draw closer, your mind’s ear can conjure up the sound of a carousel, the clink of fluted champagne glasses and the laughter of people who passed through here long ago.

They say the ghost of a bloodied British soldier hitch-hikes around these parts. I say there are other, happier, spirits at play everywhere in this marvellous village lost in time.

More than 120 years ago, there was no settlement at Matjiesfontein in the Karoo. There was, however, a former railways porter with weak lungs and a strong vision.

Jimmy Logan came out to this part of the world, somewhere between the Moordenaars Karoo, the Hantam and the biggest show of stars in the world, took a deep breath and thought to himself:

“Now that’s champagne air. I can sell this stuff!”

Back in the late Victorian era, England resembled a coal scuttle. Her cities were blackened industrial hulks, her workers had something called consumption – known today as tuberculosis – and a lungful of fresh dry air was at a premium.

So, to the ailing colonial arrivals like Olive Schreiner, Cecil John Rhodes and Jimmy Logan, a middle-of-nowhere spot like Matjiesfontein was the perfect place to recuperate. And thus Matjiesfontein Village was born, a wonderful Victorian railside settlement catering to train passengers and ‘lungers’ alike.

The dinner conversations at Matjiesfontein, can you just imagine them? The guest list included the likes of Sir Randolph Churchill, Edgar Wallace (author and founding editor of the late and lamented Rand Daily Mail), Prime Minister John X Merriman and the entire English cricket XI, who often toured the Cape at Jimmy Logan’s expense.

Jimmy Logan, a railways man, had the ‘knack of the Karoo’, which involves the ability to look past bare horizons and see opportunity.

He worked out that locomotives crossing the Karoo would each need 250 000 litres of water. Logan found a source of water in the area and piped it down to Matjiesfontein where, in November 1889, he launched an elaborate ‘water world’ in the desert. Now he was selling fresh air to tourists – and water to the railways.

With the money he made catering to the railways, Logan began to import building materials, recreated a London suburban street and eventually built a fine Victorian hotel that thrives to this day.

The rest of this story appears in Karoo Life I . There’s a Fabulous Combo Deal for the entire Three-Part Ebook Series! Click HERE

Karoo Life I: Museums of the Karoo

The Upper Karoo – Gateway to the Stars

Karoo Life I – A New Book From Karoo Space!

2 thoughts on “Karoo Life I – Matjiesfontein”