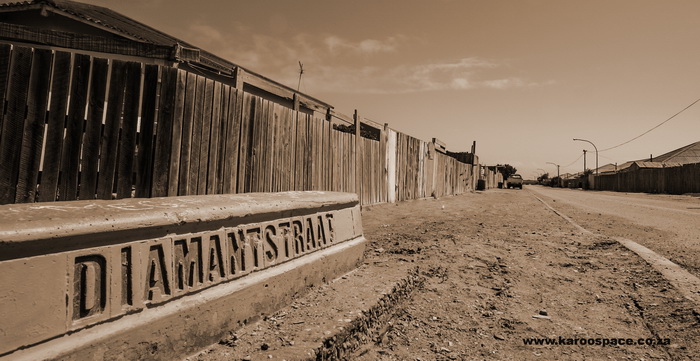 A rotund little homing pigeon sits in swirling mist on a road somewhere in Alexander Bay, looking upwards at the Richtersveld skies with pleading eyes and flapping his wings.

Approaching fast is the policeman, and you can hear his heavy tread on the tarmac. The bird, on the lam with nearly 10 000 US$ worth of stones, is the picture of guilt and anxiety, as it launches itself less than a metre up and flops back onto the road. It’s like the Getaway Car That Couldn’t.

The officer, spotting the contraband on the pigeon’s undercarriage, takes aim with his service rifle and the shot can be heard for miles down South Africa’s Mother River: the Orange.

Flame-winged flamingos shrimping at the river mouth share dark looks with dapper little avocets wading elegantly in the shallows. The kelp gulls, dressed like casino heavies in city suits, gaze philosophically out at the gunmetal-toned waves of the heaving Atlantic Ocean. They know exactly what’s gone down. Rotten luck, old fellow. See you up at the Birdy Gates. 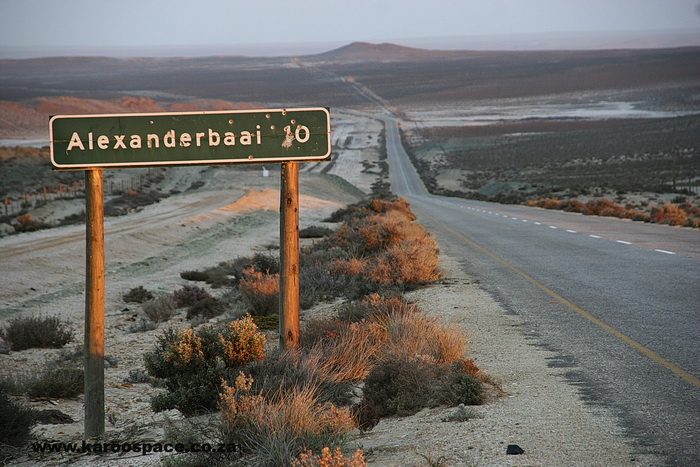 Arriving on the outskirts of the little desert town, I thought of the old-time Namaqualanders, poor as rooftop rats, building the smooth road our ever-trusty, ever-dusty, diesel bakkie was gliding over. They couldn’t get jobs in the new fenced-off diamond fields, so they worked here for seven shillings and sixpence a day.

These men could sense millions of pounds’ worth of diamonds lying under their feet. Many of them felt those diamonds should belong to the sons and daughters of this harsh country, who had endured more than a century of hellish heat and dust to shove their roots into the land.

Back, briefly, to our luckless pigeon, who by now was a mess of bloody feathers on the otherwise-pristine main street of Alexander Bay. 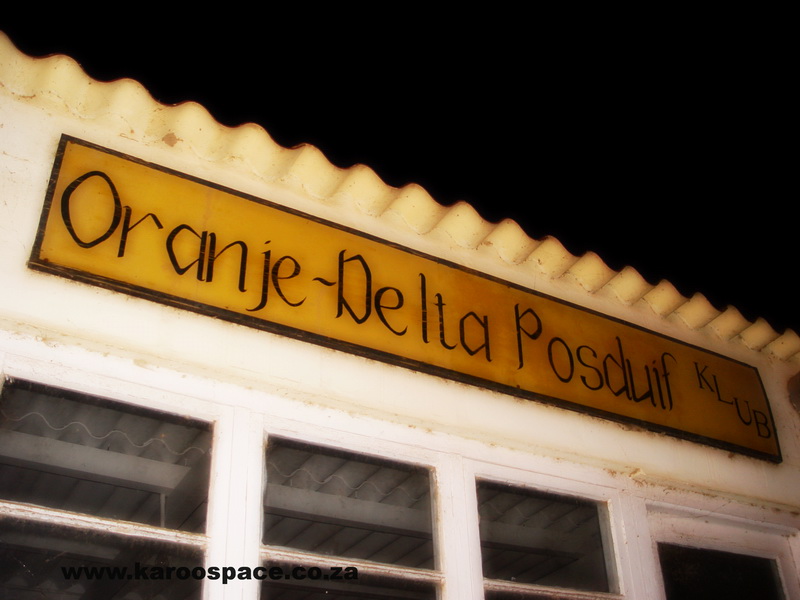 A Bird in the Hand…

In the late 1990s, pigeons were being smuggled into the restricted diamond fields of Alexander Bay, loaded with stones and sent on their way home where willing hands would relieve them of their precious loads. It was such a ridiculously old, worn-out trick that it actually worked for a while.

In fact, when we ran this scam by some bona fide pigeon fanciers later, they scoffed and said:

“A serious pigeon farmer who wanted to smuggle diamonds would simply make them eat the stones, let them fly home and then give them a small pill to empty their innards.” Just as I thought.

An uproar followed in the South African Parliament, where it was announced that Alexkor, the government-owned mine at Alexander Bay, was losing 200 million US$ in stolen diamonds each year, most of them “strapped to well-trained homing pigeons”.

The word went out, arrests were made and various homing pigeon clubs (which, ironically, had been given start-up funds by Alexkor) were closed down. More than 900 birds were given the boot.

It emerged that one Jakob Holtzhausen, a machinist who worked in the binnekamp (inside camp) at the mine, had become a very keen pigeon fancier and a bit of an avian tailor as well, because he developed a nifty little harness he could attach onto his flying smugglers.

He would take one to the diggings in his lunchbox and, as he found the diamonds in the course of his work, would load them into the bird’s harness. You can figure the rest out.

Jakob went to jail for a year and from that point onwards, pigeons were shot out of the sky over Alexander Bay.

So you can imagine the kind of reception given one rather clinically-named GB S82074.99, a British homing pigeon that famously strayed off course in mid-2002, when he flew in over Alexander Bay all the way from Derbyshire, England.

Old ‘GB’ had been on his way to France when he was blown down to Africa in a storm over the English Channel and arrived 8 000 kilometres later in Alexander Bay. He was captured, presumably strip-searched and returned to his owner, Englishman Harry Sinwell. 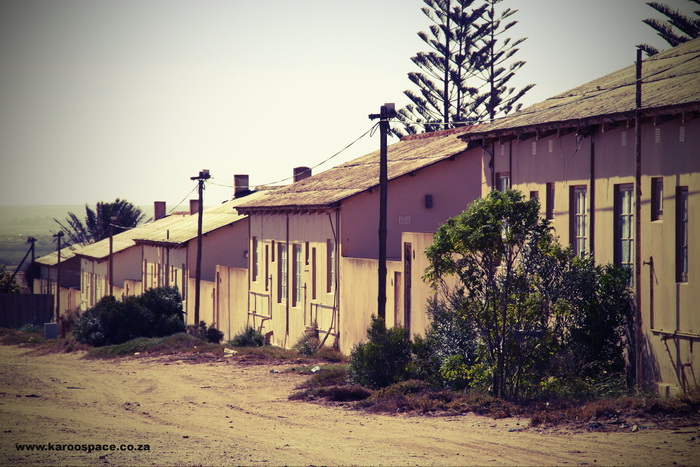 The Social Side of Alex Bay

Alexander Bay society used to be divided into Binnekampers and Buitekampers (people who lived inside the restricted area and those who were outside the fence). Before leaving the area on weekend pass, binnekamp families and their possessions were thoroughly searched, because diamond smuggling in Namaqualand has always been as natural as truffle-hunting in France.

Namaqualanders are known for their prowess on the dance floor. The initial absence of women did not stop the men of Alexander Bay from having a roaring good stomp to an old tune on a Saturday night. Like their counterparts in the gold-mining boom times of Barberton, they would ‘bull dance’ until the dawn, tossing each other about with much gusto. At the village of Grootderm (Large Intestine), the local headmaster held bull dances for the miners in his school canteen.

“Go dance with your friends,” was an often-heard refrain uttered by a rather bruised wife.

Those were the days of beach parties, giant crayfish screeching away in 200-gallon drums of boiling water, epic fishing expeditions and the occasional overdose of Cape Smoke, a particularly vengeful black sheep of the brandy family. 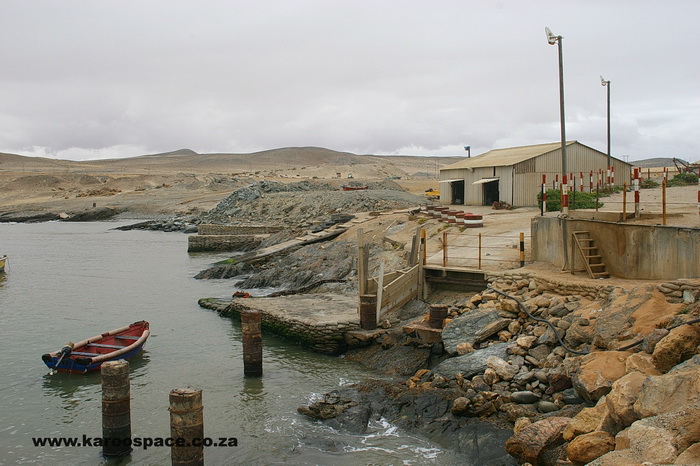 Diamonds in the Desert

Namaqualand is a vast, barren country of little more than 120 000 souls, a place that gets a total of 50 mm of rain each year. That’s about equal to a couple of moderate Johannesburg thunderstorms every 12 months.

“God didn’t give us rain – He gave us diamonds”, is the old Namaqualand philosophy. And, according to writer Pieter Coetzer in Bay Of Diamonds, many locals openly admitted to illegally dealing in the stones.

But at Alexander Bay, it’s still taboo to swing your tongue too freely around the word ‘diamond’.

“We were taught to always use the word ‘product’ when speaking about, er, diamonds,” said Pieter Koegelenberg, who had given a quarter of a century to ‘the bay’. Children playing ‘diamond in the sand’ games were told to use the word ‘pearl’ instead. We discovered that a diamond mining camp (did they call it a ‘pearl mining camp’?) was a place of paranoia.

If there was the slightest bit of suspicion about you and your character, you were packed out of the village before the morning paper arrived from Springbok. Like company towns all over the world, you had to adhere to a very strict code of behaviour.

In earlier years, if your wife was caught having an affair with another bloke, you were all kicked out of camp. No notice, no polite ‘first warning’. Just take the next bus south to Port Nolloth and don’t come back. 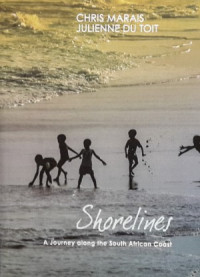 And woebetide you if they found diamonds on the soles of your shoes.