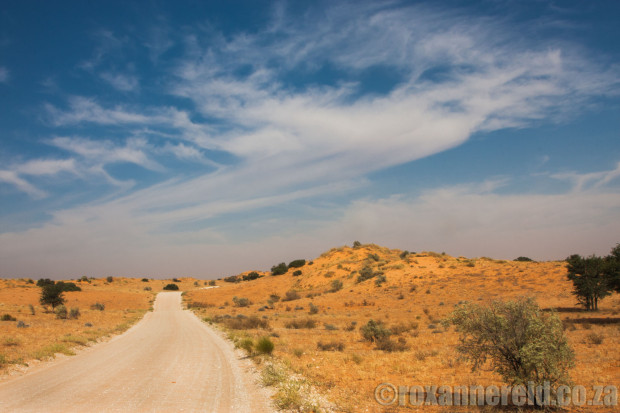 Words and Photographs by Roxanne Reid

If you’ve ever travelled the Kgalagadi Transfrontier Park’s corrugated roads then you’ll know they’re not to be trifled with. So imagine our surprise when we came across a 44-year-old road caravan lording it over the camp site at Nossob.

Over the past few years those Kalahari roads have become legend. So rib-rattling can they be – usually when the rangers’ boer-maak-’n-plan row of car tyres linked up behind a tractor to “drag” the road hasn’t been used for a week or so – that licence plates and motor parts are shaken loose. We’ve seen trailers abandoned on the side of the road with broken axles, and we’ve seen 4x4s loaded up on a flatbed and ignominiously carried off out of the park.

So you’re courting disaster if you tow anything less than a hardcore 4×4 trailer or caravan into the Kgalagadi. If you have a normal road caravan, you tow it along the tar road to the entrance camp at Twee Rivieren and you leave it there for the duration of your stay. You certainly don’t schlep it up to Mata Mata and then across to dunes to Nossob. 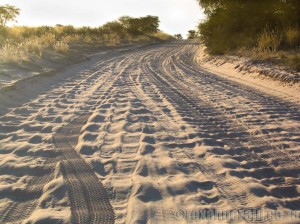 But that’s exactly what 80-year-old Danie Mostert and his wife Joy (79) did in May 2011. We caught up with them at Nossob, where Danie explained that they’d been travelling the country with it for 44 years and didn’t see why they should stop. It wasn’t the little van’s first trip to the Kgalagadi either.

Not a thing in the Mosterts’ vintage old trooper had shaken loose.

“No problems at all?” I asked, amazed.

“Well, we have to clean up a bit because the dust gets in,” Joy conceded.

It’s enough to put modern-day caravans to shame. Even the owners of a clutch of heavy-duty macho-man 4×4 caravans were pretty impressed.

Danie and Joy’s old van may have lacked sex appeal, it may have been devoid of the zhoozsh factor, but it sure had guts and staying power. They just don’t make caravans like they used to.

They don’t make many 80-year-old adventurers like Danie and Joy either. 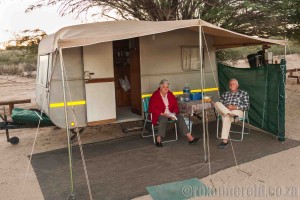 “Retirement home?” scoffed Danie. “I’d die of boredom! I like doing my own thing.”

Their son Fred later told me his parents had travelled with him and his wife on a 7 500-kilometre trip through Namibia two years before.

“I had my Isuzu 4×4 and an off-road trailer, Dad had his Toyota Condor 4×4 and that same old caravan,” said Fred. “Now Dad’s pressing my brother Nick and me to plan a trip to Botswana before he retires his caravan.”

I love that the caravan might be retired one of these days, but not Danie and Joy. I hope I can be like them when I get to their age. 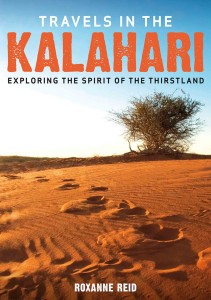 This is an extract from Roxanne Reid’s ebook Travels in the Kalahari, which is available from Amazon. Roxanne is a writer, blogger and book editor who writes regularly for Wild and Getaway, as well as her own travel blog. You can follow her on Twitter or on Facebook at Africa Addict.