We’re currently tying up the last loose ends of a Karoo book that’s been 20 years in the making – a true storyteller’s labour of love.

As you enter Karoo Roads, you are invited to sit down with a group of long-dead men called Oom Aapie Ludwick, Vlakhaas Davis and Gwar Liebenberg, Lords of the Footplate who criss-crossed the Karoo in their steam-metal dragons for decades before settling in the railway town of De Aar.

Turn the page and you’re astride a horse called Champagne in the Sneeuberg Mountains between Graaff-Reinet, Nieu-Bethesda and the sunrise, in the company of cowgirls. That’s right. Cowgirls in the Karoo. 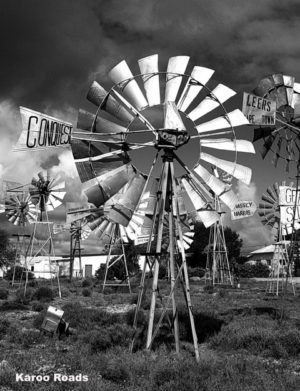 Our collection of classic Karoo Wind Pump stories and photographic gallery takes you from farm to farm, region to region, with brand names like Beatty Pumper, Star Zephyr, Spartan, Southern Cross, Massey Harris, Aermotor, Gypsy Wonder, Gearing Self-Oiled and, wait for it, Vetsak President. Not to mention the ever-present Climax. You end up in the famous Wind Pump Museum at Loeriesfontein and find out how they all landed here.

What follows is a lovely, random night of wine drinking, good music and offbeat encounters in the village of Aberdeen, a veld walk with Beaufort West streetkids-turned-rock art guides, and a flute of champagne with the late David Rawdon, second Laird of Matjiesfontein, as the first rains of the seasons fall after a very long drought. 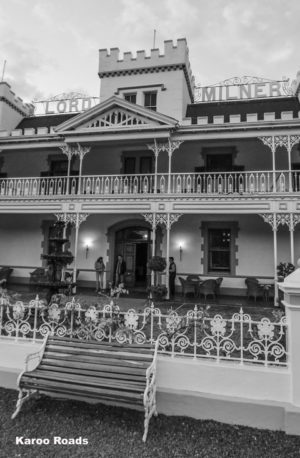 Then it’s deep into the concrete heart of the Gariep Dam for a rare tour, a series of parties and late-night sessions with the diamond divers of Port Nolloth, a heart-to-heart with an ostrich, a riel dance for Outa Lappies of Prince Albert, an historic trip into the yesteryears of Norval’s Pont, moving on to sing a rousing chorus of Jimi Hendrix’s Hey Joe with a gang of Cape Town bikers at the Rock Saloon on Route 62.

We’re meeting the Rasta Brothers of Calvinia, chasing the story of the Karoo’s Spitfire Ace, kicking back at a Saturday Night cabaret in Steytlerville, finding out exactly how Texas Jack managed to win a bet by riding a mountain zebra outside Cradock, discovering a circle of dancing statues in the middle of nowhere outside Loxton, wandering a forlorn gravesite where British soldiers lie at Deelfontein Siding, meeting the Master Builder of Rietbron, following all manner of ghostly tales, shopping for oddments, driving into blizzards and finally meeting the man behind the Gift of the Givers, who have done so much for the Karoo in trying times. Then there is also the unforgettable weekend we spent with herbalist and general wise man Johannes Willemse and his singer-apprentice, Antoinette Pienaar.

The final photographic edit, the 20th read-through and the last-minute fact-checks have all been performed. Now it’s time to select the paper, the font and the print run. And Karoo Roads is born – just in time for the Christmas stocking.

The authors, Chris Marais and Julienne du Toit, would like to thank the hundreds of readers who pre-ordered their copies of Karoo Roads and made printed copies of this book possible for many other Karoo lovers as well. Look out for your special presents when your book parcel arrives from us!

An author-signed and numbered first-edition copy of Karoo 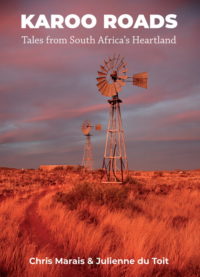 Roads (with something extra inside) can still be ordered (R350, which includes tax and counter-to-counter Postnet delivery) from Julienne at julie@karoospace.co.za