“Is your ideal vacation in Puerto Penasco or the Northern Cape?” was the headline of a TripAdvisor alert I received today.

Hmm. Tough choice. Been wasted in both parts of the world. But here’s my take on Puerto Penasco.

Back in the early winter of 1981, I was in a red Cadillac heading south of the Arizona border in the company of Crazy Bob, my travelling buddy Spike and the mellow sounds of Mr Elvis Presley on the eight-track stereo.

We had just met Crazy Bob, and he had successfully convinced us to come cathousing with him in Mexico.

At the outskirts of a fishing village called Puerto Penasco (Rocky Point), we pulled in at the Capri Bar. It was a single adobe building with an open doorway on either side.

You entered in by one doorway, you drank a couple of beers and you went out by the other doorway to have a piss against the crumbling back wall.

Day of the Dead Wurlitzer

The first thing we did was tend to the dead Wurlitzer jukebox in the corner.

“Let’s fix this darn thing,” cried Bob. He was feeling quite coltish.

Bob connected various wires, plugged in the ancient player, checked the song list and found something with English lyrics: You’re The One That I Want, starring John Travolta and Olivia Newton-John.

There was a woman with buck teeth behind the bar. She gave us the silent treatment, the lazy eye and three beers.

Bob went round behind the counter, took her in his arms, came out onto the floor and they began a sad little shuffle around the Capri Bar. It was not quite Grease.

We drank Dos Equis with salt, lemon and a dash of melancholia. This was not how we had pictured heady Mexico.

But Bob had plans for us.

“Let’s go see a friend,” he yelled above the music.

We drove through rutted dirt streets, looking for a girl called Strawberry. Eventually, after many directions and wild guesses, we found her emerging from a regular client’s home.

How nice, I thought. She makes house calls.

Soon, we were all in a better cantina. I met some American sport fishermen who wanted to know about Mozambique.

Spike and I invented a set of spurious quick-facts about barracuda and laid them on our appreciative audience.

Of course, there was no Google back then to contradict us.

“But,” we added. “Our specialty is ostrich hunting in Zimbabwe. Yeah. That’s what we do for a living. Chase those suckers down and shoot ‘em in the right eye. So the bullet goes directly into that tiny brain and saves the meat.”

We took them through the Classic 11 Stages of Ostrich Stalking, pantomiming the whole thing, behind tables, me the hunter, Spike the flightless bird.

We used to do that. Make up a disposable story and leave the area before being found out.

Rosa With the Lovely Smile

Our new and improved bar lady was Rosa. She had a light moustache, white teeth and a lovely smile.

Hours later, after having successfully hunted at least five ostriches, we were flushed, drunk and happy.

This, finally, was Vintage Mexico. Now, which way to the whorehouse?

It was a large flat building up on a hill overlooking the sea.

Inside, it was like a massive Karoo shearing shed with the longest bar counter in the world.

The Cathouse on the Hill

A half-dozen short barmen in basic black, bowties, starched white shirts and pointy shoes lined the counter at their posts and waited for us, the first customers of the evening.

Rusty metal chairs with vinyl seats were arranged against one wall. Little round women sat on these chairs with bored looks on their faces.

But they were giving our Strawberry the jitters.

So off we went to a small, homey cantina with bullfight posters on the walls and a live Mariachi trio of guitar players.

We talked, we drank some more. Strawberry tried to teach me a series of nifty tango moves on the dance floor. But all the excesses of the day were catching up on me and I could hardly walk.

We sat down and just enjoyed the cantina for what it was: a Saturday night pit of red-faced party people living in a Mexican moment.

Local men came up, one by one, introduced themselves to me and asked if they could dance with Strawberry.

A Guide to Meerkat Hunting

Sure, I said, waving magnanimously.

These fellows turned out to be the entire police force of Rocky Point. They were Strawberry’s old friends.

Strawberry found herself new friends and disappeared into the night.

No worries, because by now I was having deep speaks with the Puerto Peñasco constables, explaining exactly how one hunts meerkats when on safari in Africa.

We headed back to Sonoyta in the Thunderbird at daybreak. And right into a frikkin’ roadblock. 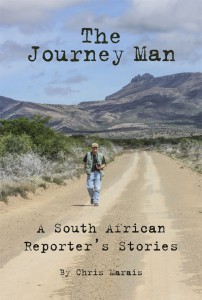 Men in dark shades with shotguns circled our car, peering in at us. Bob showed them his ID and they waved us on. We did not resemble drug cartel bosses.

But at the border post on the American side, however, it was a different story.

The officials told Spike and me to go sit under a tree while they took Bob’s car apart, piece by piece.

Bob came up, sheepish grin on his face.

“Sorry guys, I forgot this one little detail. They got me registered as a regular drug user on their data base. So every time they see my T-Bird coming through, they tear it apart. We’ll be outta here in no time.”

I turned to Spike and said:

“I am never going to drink again. And I hate deserts.”

Which, more than 30 years later, strikes me as being simply silly. I love my red wine and I work in the Karoo, the world’s friendliest desert.

This is a short extract from The Journey Man – A South African Reporter’s Stories by Chris Marais. The book is available in Print HERE and in Ebook HERE.

2 thoughts on “The Journey Man – One Night in Mexico”