In its previous life, the quirky Williston Mall was the Arm-Man se Hostel (Home for the Poor). Needy children, sometimes plucked from behind a herd of sheep, were its residents.

There’s even skaapstert on the breakfast menu.

The owners, artists Pieter and Elmarie Naude, have even been given the nod by The Lonely Planet guide.

Road trippers wander through, take selfies and post them on social media. Word of the Williston Mall spreads, followed by a collective cheer from the misfits and the rebels of this world.

From the Bank to the Studio 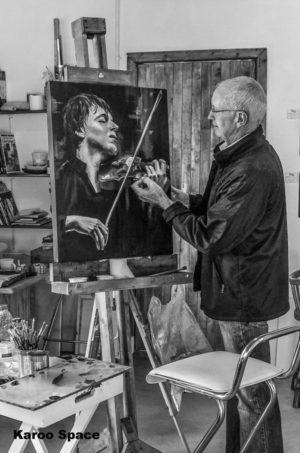 When Johan Trollip quit the life of international banking, he moved from Switzerland to Steytlerville and set up a studio, pouring his creative spirit out on canvas. And this tiny Eastern Cape Karoo village suits him just fine.

“One of the reasons I like living here is because there are other artists around to collaborate with. Only when I began to mentor some of the budding local creatives did I realise how much talent there is in Steytlerville.

“Our group shares ideas and we solve problems together. This is why I feel safe here. My art is my passion. It’s what encourages me to get up every morning.”

Johan also doubles up as manager of the Royal Hotel. Here are his tips for moving to the platteland as an artist:

“You’ve got to be healthy and relatively financially stable. You must have made your income or be able to sustain yourself. There are no big industries. You won’t be able to make money from the community. Master the use of Facebook or Instagram to market yourself.” 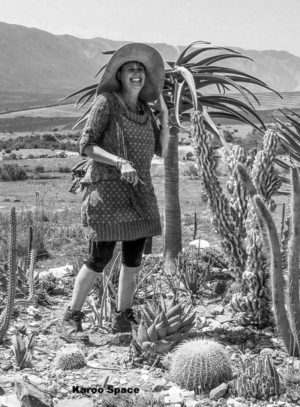 When not occupied with set-building for major movie studios down in Cape Town, Allana Willox tends a massive nursery full of cacti, aloes and succulents on a property called Kannabos outside Uniondale. This is also where she paints on canvas and creates with ceramics.

“Painting is intense, you’re discovering yourself, working with emotion and feeling. Pottery is therapeutic. You throw clay on the wheel and there is instant gratification.”

Her various media, even the plants, are beginning to merge in her artworks. Otherworldly images of succulents appear in her paintings and bowls – the starfish-like flowers of the Stapelia, indigenous local plants like ostrich foot, Fenestraria, Haworthia, Gasteria and the Prince Albert aloe.

“It’s been wonderful learning about them, watching them grow.” 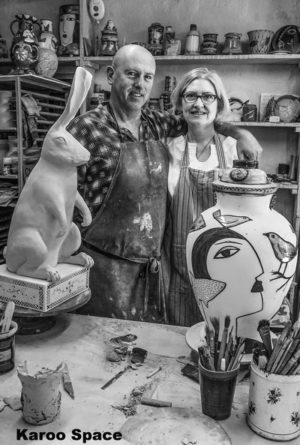 One of South Africa’s leading ceramicists is Charmaine Haines. In 2002 she and her husband Martin left Port Elizabeth for Nieu-Bethesda.

“Dry spaces attract creative souls. They are places for retrospection and reflection. In the platteland, you are more deeply affected by immediate life around you: deaths, births, christenings, funerals, water issues, farming, food security and the weather. You become more aware and mindful of everything all about – the grace and artwork that is written in the steenbok tracks and hidden veld flowers. Small things matter.”

The Karoo was also where Martin found his artistic mojo. He had mostly been the background man, supporting Charmaine’s work and handling the practical side of production and exhibitions.

But one day, in a moment of madness, he took some clay and created a beautiful scrub hare, like those you see at dusk among the bossies. The quirkily individualised versions of the hare have become collectors’ items. 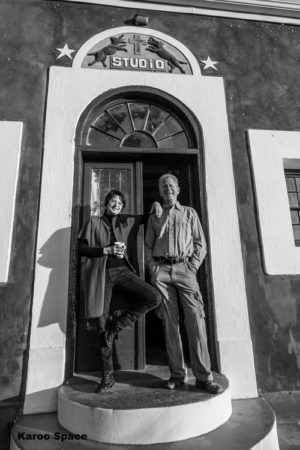 Roger Young started his professional life in Cape Town as a bespoke furniture-maker. Then he moved to the beautiful Red Stone Hills near Calitzdorp to escape the crime and the noise.

The landscapes inspired him to pick up a camera, but it was the people of the region that moved him more. His gallery at Kruisrivier is packed with world-class black and white photographic prints and his workshop is a testament to a passion for good wood and style.

His partner, former professional ballet dancer Phyllis Midlane, is a costumier, mascot-maker and seamstress, frequently spending long months in Cape Town on productions like War Horse. In her studio, she has now also turned to the equally three-dimensional arts of hat-making and sculpture, stirred by the faces of those around her. 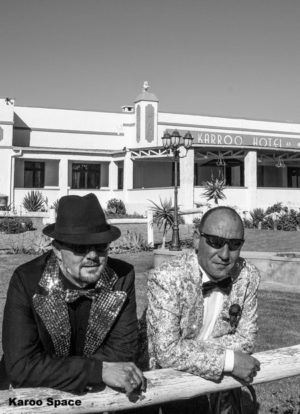 Concert pianist, entertainer and clown Mark Hinds and singer Jacques Rabie bought an old hotel on the outskirts of Steytlerville in 2003.

It was a derelict shell, unoccupied for years. Everything of value had been stolen – light wires were hanging out, the copper piping was gone. The filth was shin high. But it did have thirteen rooms, three bars (one with a salvageable brass foot rail), a dancehall and a squash court. They bought it.

“When we moved in, we went to the local furniture store and bought one double bed, for two men to share. That, apparently, was bigger local news than the fact that the hotel had just been sold,” says Jacques.

He and Mark let it all wash over their heads. They introduced themselves as “Die Moffies op die Koppie” (The Gays on the Hill).  The locals gradually became used to them, referring them as ‘oulik’ (sweet) and welcoming them to kerkbasaars.

Over the years they have both become creative multi-taskers of note.

By day, Jacques is the cross-dressing maintenance manager at the Karroo Theatrical Hotel. There isn’t a roof leak he can’t fix, a toilet he cannot unblock. After the sun begins to droop over the mountains, Jacques is the hotel chef. He runs the dinner menu, while Mark is the front man, host and social media maven.

And when the curtain goes up at the in-hotel Grimaldi Theatre on a Saturday night, Jacques takes on his third role as Dame Leyla Lamborghini. But not before spending a bit of time in a little backstage dressing room, putting on the Ritz and the war paint. He also designs and makes all his own costumes and the fabulously swagged curtains around the hotel.

With Mark at the grand piano (as Freddie Ferrari) and Jacques in full costume, they present The Steytlerville Follies. It comes complete with song, dance, a musical bottles display by Mark and a duet by Jacques and a puppet called Charlie.

“Yes, I’m a ventriloquist as well,” sighs Jacques, as he totters off on his high heels to fix the pesky gate motor. 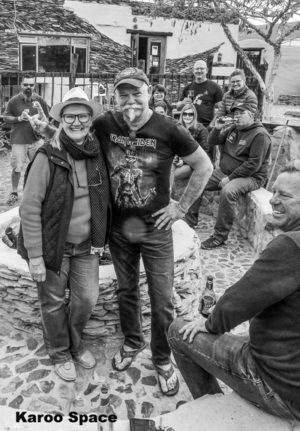 In 2015 Janet Brewer and Marius Slabber met via an Internet dating service. He had been a farm manager near Tulbagh in the Western Cape. Janet had worked in travel and tourism around the world until she retired in South Africa.

“We were initially just looking for a holiday spot together, but then we found this,” says Janet, gesturing to the beautiful small farm ringed by peach orchards, with a bar and accommodation outside Barrydale. It even had the perfect name: the Karoo Saloon. They imagined it with good friends, tasty food, drinks and live music and the name suddenly morphed into The Karoo Saloon, Route 62 Rock Roadhouse.

Those who rate Jimi Hendrix, Led Zeppelin, Black Sabbath, Jethro Tull and Lynyrd Skynyrd come here to scratch that itch for serious live rock and a deep love of the open road. The music goes down well with a couple of shots of bourbon.

There are tattoos everywhere. Someone speaks of the Harley Full Moon Hooligan Ride, but then will say no more. The two main house rules are:

Marius, who admits to living the dream, brings musicians from all over southern Africa to play here. The ‘national anthem’ of the establishment is the eternal Hey Joe by Hendrix, and Marius often joins in with visiting bands, playing rhythm guitar.

Having the space (and supportive partner) to indulge his passions has also given Marius the opportunity to follow yet another star: that of painting rock legends. Take a stroll around the bar area and say hello to the likes of Jimi, Slash and Ian Anderson.

Janet has opened a restaurant called Klassikaroo along Barrydale’s main strip. Why not? Creativity can spread in any direction.

And on the Western Frontier 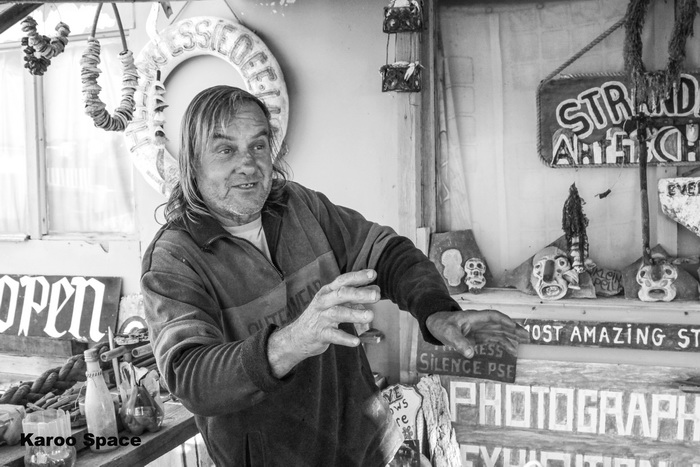 On the other side of the country in the misty shanty town of Port Nolloth lives George Moyses, aka One-Time, a retired diamond diver. One day he sold his music system, bought a video camera and in the first years of the new millennium, began documenting the life he saw around him.

“Like this one time I walked into a shop with my video camera, and everyone just ducked behind the counter. I said hey, I can see you, and eventually they all had to stand up.”

George documented life on board diamond-diving boats and even wrote a book, roughly hand-hewn. Then he set about redecorating his sea shack and turning it and by extension, himself, into a piece of living artwork.

By 2011 he was charging a small entrance fee to his house and offered DVDs of Port Nolloth life for sale. His home is full of sea-faring memorabilia and dozens of pictures of divers with colourful names like Boeta Macaroni.