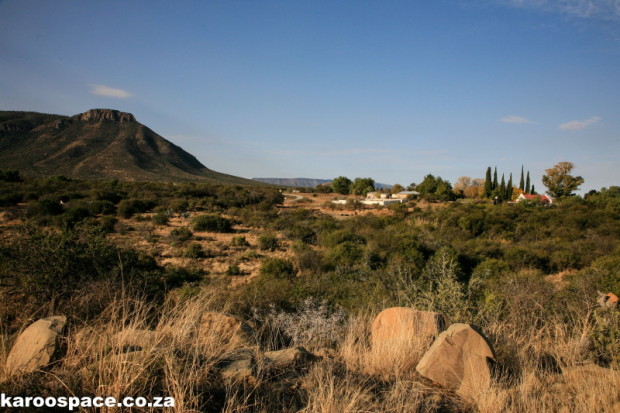 In the 90’s I used to regularly travel by car between Jo’burg and Cape Town. I was in my early twenties, had time on my hands, and chose to make a journey of these self-imposed domestic migrations.

Sometimes I would take five days to amble through the Karoo, staying at remote guesthouses in villages, way off the arterial roads, or on hidden farms that I doubt I would ever be able to find again.

I fell in love with the Karoo then, and little has changed – except the available time to travel in such an unhurried fashion.

One story comes to mind, on a typically unpredictable expedition, when I arrived at a farmhouse B&B some hours from the nearest village.

I was travelling with my girlfriend at the time, Sally, a UCT student, and I was eager to share some of my Karoo findings with her. But I chose not to take her somewhere I had been before, which was deliberate; I too wanted to taste the rare magic that is peppered throughout the heartland. I had grown attached to the constant unknown that was offered up by this great expanse and the people that settled here. 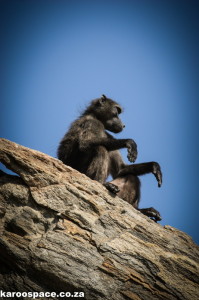 We arrived at said farmhouse, and there, in the pretty flower-rimmed front garden, was an unusual sight. A flagpole with a long chain shackled to it, and a young baboon attached to the other end of the chain. It was running about the garden, up and down the pole, barking its juvenile male call.

At first appearance, it stopped us in our tracks, but after meeting the owners – locals who had been on this land for generations, so long that the elderly lady of the house pointed to the barn and said that it had been the schoolhouse where her grandfather was educated as a child – we quickly understood that the relationship between the baboon and our human hosts was a warm and loving one, much the same as they treated all their pets.

We settled into our guest room, and found our host in the kitchen sealing her homemade blatjang in jars (a culinary dream – we bought stock for everyone we could think of back home). We asked if we could explore the valley beyond the farmhouse, and she gestured warmly to us by pointing us toward the trailhead. 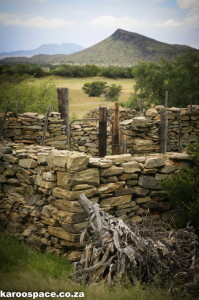 And then, in the same breath, she asked if we’d like to take along the young baboon, as it needed a walk. Sally and I quickly exchanged glances – a first for both of us. We shrugged our shoulders and agreed. We stepped outside where she unclipped the baboon from the chain, and then whistled to the wind.

Several dogs bounded from behind the sheds and the barn, and joined us. This was becoming bizarre… but perhaps the oddest thing to happen was the brindle house cat that sauntered out the kitchen door, stretched, yawned, and then rubbed up against my leg. We had another species added to our menagerie, ready for our walk!

If it was not jumping through the trellis above the stream, the baboon clung tightly to Sally’s waist, clearly terrified of me, whom it had apparently designated alpha male. The cat, to our further astonishment, walked slightly ahead of this motley safari, until our return to the farmhouse.

Alice’s words from the rabbit hole rang very clear for us along that riverine trail… curiouser and curiouser. Apparently, this was but another day in a hidden dale in the Karoo.

Song for the Karoo – Helen Lockhart