People here in the Karoo are touchy about their windmills. Erm, windpumps.

In fact, a Northern Cape farmer once told us quite directly that the accurate word for this iconic water-bearing device is windpomp.

“But that’s the Afrikaans word for it,” we protested.

I nearly added the words “ou pel”, but I could see my timing would have been completely out. So we backed off, hopped in a bakkie and drove away.

There’s a guy here in Cradock who, every time I use the term “windpump” in my slideshow presentations, yells out:

Normally he’s a sane fellow, known far and wide locally for his sanguine personality. But not when it comes to this. It’s like he attends our slideshows for the sole purpose of keeping us honest in this regard.

He says it’s because Jules and I have Huguenot Afrikaans roots that we won’t say “windmill”.

So for our new book, Road Tripper Eastern Cape Karoo, we gave in to the popular romantic version and avoided the word “windpump”, just like we never used the word “tourist”.

So it’s all about travellers having picnics under roadside windmills, which is just fine by us.

For those with interest, the word “windmill” accurately refers to a milling apparatus, like the old mills of Holland.

Perhaps the most precise – if long-winded – term is “water pumping mill”. Whatever. A steel flower by any other name would still make the water flow just as sweetly. 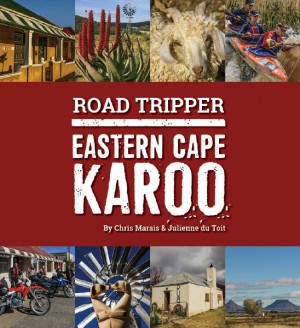 Road Tripper Eastern Cape Karoo can be purchased from Karoo Space or at most farm stalls, erm padstalle, as well as selected shops in towns and villages in the region.

A Gentle Guide to Karoo Roadtripping

4 thoughts on “Windmills, Windpumps or Windpompe?”