Come out and visit the world’s friendliest arid wilderness, the Karoo region of South Africa. Kuier with the people of Aberdeen, dance with the De Boom statues in the middle of the Hard Man’s Karoo and wander through the lonely soldiers’ graves at Deelfontein Siding.

Fly with the memory of the Spitfire Ace of Pampoenpoort, join in a tribute to the Patchwork Man of Prince Albert, rootle through a shop of treasures in downtown Cradock, meet the Rastafarians of Calvinia, hear the steam train legends of De Aar and read ghost stories from long ago.

Find out about life in an Anglo-Boer War blockhouse, the beasts of the Bankberg Mountains, how the Mother Dam feeds the Great Fish River, the first great diamond discoveries at Jagersfontein and why David Kramer’s guitar came to live in a Norvalspont bar.

Dine in a Victorian-era full-service setting, and wake up on a Karoo farm with sheep frontage.

Karoo Roads is a collector’s treasure box of trips and tales gathered from more than a decade of research and rubber-on-the-road experiences.

We will introduce you to some of the loveliest, toughest, most creative and downright crazy characters, critters and cultures thriving in the drylands of South Africa.

This First Edition is offered as an author-signed limited print run, accompanied by an A-5 sized Hand-Drawn Map of the Karoo, a set of 5 old-time Karoo postcards and a Postnet counter-to-counter courier service.

The cost to you, as a Karoo Space reader living in South Africa, is R350. If you are outside SA, we’ll work postage rates out. An e-book version of Karoo Roads is also on sale.

The effects of your contribution: 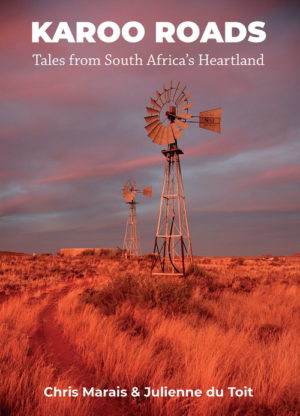 Interested? E-mail co-author Julienne du Toit at julie@karoospace.co.za for details and deals. And come along for the ride.