If there is one splendid example of a son following in his father’s footsteps, look no further than Thomas Bain. These two pioneers in the technology of road engineering left a legacy which endures until today.

He was born on 20 September 1830 in Graaff-Reinet, the seventh child and second son of Andrew Geddes Bain and Maria von Backström (the daughter of Johann Georg Friedrich von Backstrom from Germany).

Being highly educated themselves, his parents placed a high premium on schooling but they preferred home-schooling, and the children were all educated in this manner.

At 18 Thomas started his apprenticeship under his father as an assistant inspector of roads, working mainly on Mitchell’s Pass and Bain’s Kloof. This period of practical tuition under such an accomplished and inspired engineer gave Thomas a sound foundation on which to build his own illustrious career. The livelihood of father and son continued to be intertwined until Andrew’s death in 1864.

By 1854 Thomas was already Inspector of Roads for the Western Province. In that year he married Johanna De Smidt and they enjoyed a long and happy marriage in which they raised 13 children to adulthood.

Their first home was the cottage near the summit of what was then called Grey’s Pass and is now called Piquenier’s Kloof which Thomas was building at the time.

As was the case with his father, Thomas was able to use convict labour in the construction of roads. Thus, in addition to his knowledge of road engineering, he had to be thoroughly conversant with the practical workings of the convict system.

To this end, he accepted the office of superintendent of convicts. In what might appear as a conflict of interests, he also held the appointment on several occasions of Visiting Magistrate of the convict gangs employed under his general supervision on road works.

However, it was noted that during the construction of Bain’s Kloof the convicts had access to a resident school master, a minister of religion, and then a weekly visit of a doctor who rode up from Wellington.

His career took a new turn in 1873 with his move to the Railway Department as District Engineer for Wellington but after 18 months, he was recalled to the Roads Department since the authorities could find no suitable replacement to him as a road builder.

In 1877, he became an Associate of the Institution of Civil Engineers. What a busy time he had in the next 20 years! First was Gray’s Pass (formerly called Piqueniers ‘Piekeniers’ Kloof), which opened up the Oliphants River Valley to the Swartland and the Cape Town market, then Tulbagh Kloof and Prince Alfred’s Pass (Knysna).

This latter followed a 70-kilometre track which crossed the Outeniqua Mountains to connect the Langkloof to Knysna. As the Chief Roads Inspector, a Mr Robinson wrote in a report on Prince Alfred’s Pass:

“Cutting and felling through a mass of enormous trees, many with trunks of up to 70 feet long and from 25 to 30 feet in girth, clearing these huge trunks and logs away, rooting out the corresponding large stumps and in many places having to blast the road through a most tenacious rock, render it a very tedious and unsatisfactory process.”

It was while building Prince Alfred’s Pass that Thomas learnt of his father’s terminally illness in Cape Town. Apparently he was unable to get leave to visit his dying father, a damning indictment on his superiors.

His only diversion was beings asked to take Prince Alfred, Queen Victoria’s second son, on an elephant hunt. The 16-year-old prince was then a midshipman on HMS Euryalus which in July 1860 paid an official visit to the Cape. Bain accompanied the prince on a hunt at Hartebeeste-Hoek, a farm in the Eastern Cape, resulting in the slaughter of large numbers of game animals.

This coincided with the opening of the pass which was duly named after the Prince. This was followed by the pass from Long Kloof (Avontuur) to Uniondale over the Gwarna Range; Robinson’s Pass and the 90-kilometre road from George to Knysna which traversed several mountain passes and many rivers and took 15 years to complete.

Then came the 112-km Tsitsikama road over a series of mountains and rivers which opened up hitherto unchartered Crown land and forests to the public.

He completed it in three years between 1883 and 1886 with 240 convicts whose only tools were pick axes, crowbars, wheelbarrows, and wagons drawn by draft animals. Although black gun powder was available, preparation for blasting by rock drilling had to be done by hand.

Many of the boulders were split by heating them with fire and dousing them with cold water. Rocks were broken into smaller pieces with chisels and sledgehammers and then dressed by convicts working in a chain gang.

Then followed Schoeman’s Poort Pass; Baviaans Kloof Road; the deviation in MontaguPass making a short cut to George; the reconstruction of Meiring’s Poort which was entirely washed away in 1885, the Klein Zwart Berg Road; the Verlaten Kloof and road over the Koodoo Bergen; the Koo mountain pass; the Pakhuis Mountain Pass with its adjuncts towards Calvinia; the Van Rhyn’s Pass and its approaches; the high road from Clanwilliam to Namaqualand embracing a series of small mountain passes; Blue Krantz Mountain road; and the Victoria Road from Sea Point to Hout Bay.

These monumental tasks, together with a number of other mountain passes of minor importance and various sections of hard road in the Western and Midland provinces, amounted in aggregate to over 900km, all executed by unskilled convict labour.

The last years of Bain’s life were said to have been blighted by a clash of personalities which compelled him to resign. He was then appointed to the post of Irrigation and Geological Surveyor of the Colony in which capacity he designed and completed the

Verkeerde Vlei reservoir (affording the Railway Department considerable savings in a providing water service to the Touws River Station); a weir across the Vaal River and a 15km furrow for an irrigation scheme and water supply for the village of Douglas.

His talents were also extended to several surveys for large irrigation schemes along the Orange River, for the railway extensions from Port Elizabeth to various centres in the Eastern Cape.

Following his father’s interests in geology, he made extensive collections of reptilian remains from the sediment beds of the Karoo for the British and Cape museums, and reported on the mineral resources of the Knysna, Prince Albert, Barkly West and Namaqualand goldfields and the coalfields of the Eastern Province and the Free State.

All in all, he completed 45 years of service, during which he only took one month’s leave and the occasional day or two off. Road engineers are traditionally faced with heavy demands on their capacities and Bain soldiered on with his task of completing high-standard road works.

However, he paid the price and towards the end, he was worn down and in ill health. Four months after an arduous trip in a small oxcart to investigate suitable irrigation sites near Upington he was dead.

This is a chapter from The Saint, the Surgeon and the Unsung Botanist – A Tribute to South Africa’s earliest pioneers, by David Hilton-Barber. For purchase details, contact Footprint Press at 083 380 3262 or email him at david@footprintpress.co.za 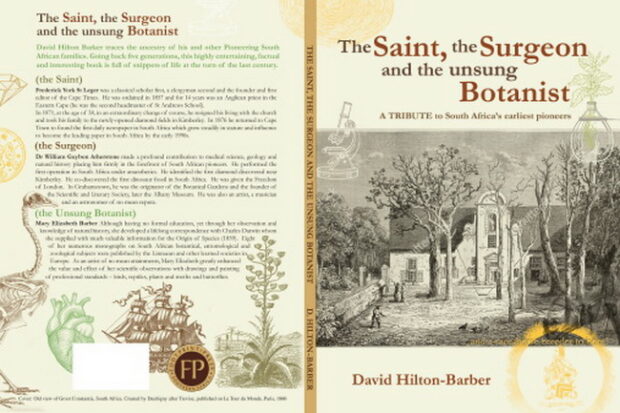 4 thoughts on “The Man Who Moved Mountains”