Something had become apparent to me by now. Shearing sheep and all that went with it was hard work – the hardest work I had ever done and indeed have ever done since.

For me, the day began at four-thirty. I would drink a cup of coffee and be in the shearing shed in the grey light of morning. As soon as it was light enough for the shearers to see, they would catch their sheep and the wool would start peeling off, warm-smelling and clean.

The three to four minutes it took for the fastest shearer to peel off the first fleece would be the only rest I would have until lunch at one o‘clock. I would walk between the two rows of bent-over figures, watching with fascination the flashing blades and the consummate skill which was needed to do the job efficiently and safely.

The shorn fleece would be picked up by the fleece-thrower, usually an agile youth whose sole job this was. He would cast it expertly onto the table so that it opened out like a great grey-and-white rug, filling the table without spilling over the sides, then dash off to fetch the next one.

The fleece-thrower’s life was not easy. There were eight shearers in my team, all of them experts. Fleeces would be peeling off at the rate of about one a minute. By the time the shearer had released his shorn sheep and captured a new one, the fleece would have to have been removed from the floor and taken to the table. 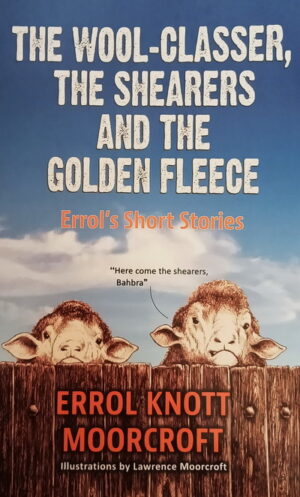 If it was still lying in the shearer’s place when he returned, hard words would be spoken. If, as was nearly always the case, the table already had a fleece on it, the newly arrived fleece would have to be placed carefully on the floor so that it could be picked up later and cast onto the table.

0n the table it took me and my assistant on average two minutes to prepare the fleece for the bins. During this time we would skirt it, removing all sweat-lox. We would then remove the dusty back, take out the neck wool and join the two halves, roll the fleece together and type the wool according to length, fibre-diameter, condition, tensile strength, colour and a host of other factors.

‘Keep the floor empty, the table full’ – that was his job.

We all worked at the trot. By six o’clock, as the sun rose, we would have our shirts off, and for the rest of the day we would be bathed in sweat.

The most trying time was midday when the Highveld sun blazed down on the corrugated-iron roof above our heads, raising the temperature to murderous levels.

Despite our best efforts a backlog always built up. By breakfast time, which was at eight o’clock, there were usually between ten and fifteen unworked fleeces lying on the floor. As the shearers trooped out, stretching their aching backs, the fleece-thrower, my assistant and I stayed on behind to work away the backlog. Breakfast was over in half an hour.

By that time the last of the fleeces would have been processed, and we at the table would have three or four minutes in which to gulp down our own breakfast.Mine usually came across from the farmhouse on a tray, covered by a white doek. Invariably it was krummelpap, a crumbly dry porridge made of mealie-meal. This was a filling and sustaining food and, washed down with a mug of hot tea, did wonders for my flagging energy.

Sometime between working away the last fleece and having my breakfast, I had to count out the shorn sheep, write up the tally, and organise for a fresh lot to be brought in. I also cast my eye quickly over the out-sorts department. Here wool discarded from the classing table, and also the belly-wool would be classed. This was usually done by unskilled farm labourers and was always a problem. I had to train these people in a fairly skilled operation while keeping my own department in order.

The bale would then be taken off for storage. This was a messy and time-consuming job, and my fingers were perpetually blue from the ink.

Much labour was required for all these processes, and invariably labour was in short supply. Sometimes the labourers were old and infirm and had difficulty sustaining the degree of physical effort required of them.

At lunchtime we had a full hour. If I was lucky after I had eaten my lunch from a tray, there would be an opportunity to lie down on a wool bale for ten blissful minutes. The wool bales were ideal for resting on. They were firm yet yielding and they exuded a warm, woolly fragrance.

I developed the knack of falling asleep almost immediately and would sleep until the first fleece hit the table. That would be my last rest until seven o’clock in the evening. The skill of falling asleep anywhere, in any position, is one which I have not lost to this day, and it was sometimes the cause of much mirth amongst my Parliamentary colleagues.

Shearing continued until it became too dark to see and there was a danger of cutting the sheep. This was normally about half-past-six in the evening. After I had counted out the last pen of shorn sheep I would count up our tally for the day. 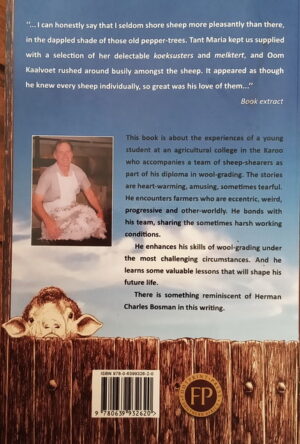 It would usually be between four and five hundred, with the last of the fleeces worked away, the shorn sheep counted, the woolled sheep for the next day’s shearing brought in, the full bales pressed, sewn and stencilled, and the tokens counted and reconciled. It would be dark, and I’d be able to walk back to the farm-house in the glorious cool air of evening, aching in every muscle but feeling the contentment of a labourer at the end of a hard day’s work well done.

My third clip belonged to a Mrs Jansen of Kameeldoringbos. She was a widow who lived with her son – a strapping youngster who had come back to the farm when his father died. His name was Paulus.

Paulus’s shearing shed was a very different place from the previous two in which I had classed. There was a genuine wool-classing table with revolving slats and a wool press.

Working under the pressure the way we did, it was understandable that any additional help that came our way, particularly if it was skilled, was more than welcome. Young Paulus was just such a skilled worker.

As the first fleece hit the table he took over the skirting. This meant that instead of side-stepping crabwise up and down the length of the table, tearing off the soiled woolly edges and removing the back, I could stand restfully at the head, remove the neck-wool, type the fleece and deposit it in its bin.

Paulus’s presence reduced my workload by half. The prospect of eighteen hundred sheep on the trot did not seem quite so daunting.

‘Of course, I only help him until the first bale has been pressed, and then I lie on it for the rest of the shearing,’ he continued. 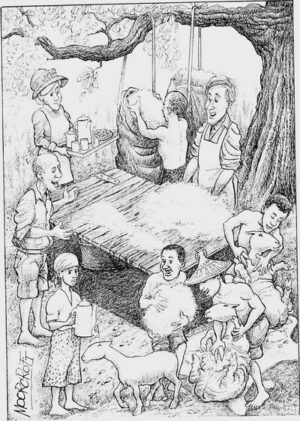 By nine o‘clock we had shorn a hundred sheep and the first bale was ready to be pressed. It came out of the press and toppled over with a satisfying thud on the floor. I stencilled it, and Paulus and I rolled it into position in the storage space.

The sun slanted in through the window, warming the brown jute surface invitingly. Paulus sat down on it and then reclined with a sigh. ‘Ah, that’s better,’ he said, and cupped his hands behind his head.

Two days and seventeen hundred sheep later he was still there. True, I had had to so arrange the rest of the bales that his view of proceedings was unimpeded, but he at least had kept his side of the bargain: to help me until the first bale had offered itself so temptingly to his lusty young frame.

The Wool-Classer, the Shearers and the Golden Fleece is published by Footprint Press. For more details, contact David Hilton-Barber at 083 380 3262 or email him at david@footprintpress.co.za

2 thoughts on “Hitting the Woolsack”