Skip to content
Once upon a time, the Richtersveld village of Port Nolloth was awash with whip-lean, good-looking young diamond divers who loved to listen to the Rolling Stones on eight-track cassettes while they plied their dangerous trade out on the Atlantic Ocean.

Those rockers who remain in Port Nolloth have ‘grizzled up’ somewhat. Many of them still go out in search of that magical deep pocket of diamonds lying on the sea bed, and they occasionally party up like they did in earlier years.

One of these local legends, George Moyses, has semi-retired from the sea. He set up home in a gloriously slumped sailor’s shack right on the beach at the nearby resort village of McDougall’s Bay, gave the place a serious touch of ‘sea dog decor’, renamed himself One Time Moyses and opened his doors to curious visitors – at R10 a pop.

He’s also doing something quite invaluable for the Port Nolloth diving community by recording real life here in this misty village by the sea. You can buy his curiously classic al dente DVDs and hear all about the legends of a wrinkled old diver who goes by the name of Boeta Macaroni.

“That’s a face that has seen lots of wine, fish, sun and east wind,” the roguishly cherubic One Time will tell you.

And if your curiosity lingers, he will continue:

“I couldn’t wish for a better life. I’ll be fine, just as long as the tsunamis don’t catch me. In my bedroom, I’ve got a mattress in a boat just in case. Then I can just float away.”

Incidentally, the Nama name for this piece of colourful coastline is Aukwatowa. It means ‘where the water took away the old man’. George Moyses knows this. 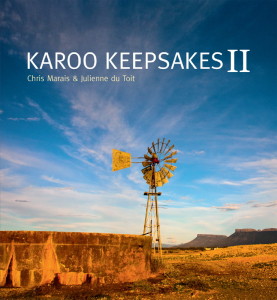 Reviews of the Karoo Space e-Bookstore