The Karoo sprawls over 40% of South Africa’s landmass, a warm dry heart at the country’s centre.

Rainfall is low in this semi-desert covering 400 000 square kilometres (a little larger than Germany or Norway). Yet it’s a highly productive arid zone, with mineral-rich soils and a staggering 6 000 species of plants. Nearly half of these plants are found nowhere else.

Within the Karoo’s boundaries are found roughly a million people living on farms and about 100 towns and settlements. The vast majority of towns and farms are completely dependent on groundwater – which accounts for all the wind pumps.

The Karoo’s main industry is small livestock farming. This bio-region accounts for 30% of the country’s protein needs in terms of mutton and beef. There are around 3 million Dorper sheep, used only for meat production, plus 4.2 million wool-producing sheep, more than a million goats and a growing number of cattle and wild animals, mostly in the grassier Eastern Karoo.

Karoo lamb is internationally famous for its delicately herbed flavour, which comes from the plants eaten by the sheep.

There is irrigation agriculture along the Orange, Great Fish and Sundays Rivers, and crops here include maize, lucerne, fruit and nut trees, grapes and wheat.

It is roughly divided into three main areas – the Great Karoo (also called the Nama Karoo), which shades into the Grassy or False Karoo in the east; the fertile Little Karoo (also called Klein Karoo) and the Succulent Karoo (sometimes referred to as Namaqualand), notable for its very high plant biodiversity.

In fact the Succulent Karoo is recognised by Conservation International as one of only two arid zone biodiversity hotspots in the world.

Because the Karoo falls into four of South Africa’s provinces – Western Cape, Eastern Cape, Northern Cape and Free State – it has never been managed as a single coherent bio-region.

The Karoo Development Foundation, however, has begun to pull together people and towns from the region to create dialogue and connection between disparate communities.

The KDF has also organised two major conferences (Graaff-Reinet in 2009 and Beaufort West in 2012) and the first Karoo Parliament (Philipstown, 2013).

The Karoo is already benefiting from a worldwide growth in desert tourism.

As the KDF points out in a 2013 tourism strategy document: “The Karoo offers nothingness, which is increasingly valuable, in terms of space, silence and solitude.  Urban people live in stressed societies… and the Karoo offers a healing experience.”

Geologically and palaeontologically, it is already one of the most famed areas in the world. About 253 million years ago, the Karoo was a vast inland basin, a lush Okavango of unimaginable size, bracketed north and south by huge mountain ranges. Wandering through it were strange creatures – cynodonts and dicynodonts, tiny diictodons and scary gorgonopsians.

According to Professor Bruce Rubidge, Director of the Evolutionary Studies Institute at the University of the Witwatersrand and also Director of the Centre of Excellence for Palaeosciences, the Karoo is “the only place in the world where such a time-extensive fossil record of the early diversification of reptiles is preserved in a single basin, chronicling the most distant evolutionary ancestry of mammals in remarkable detail.” 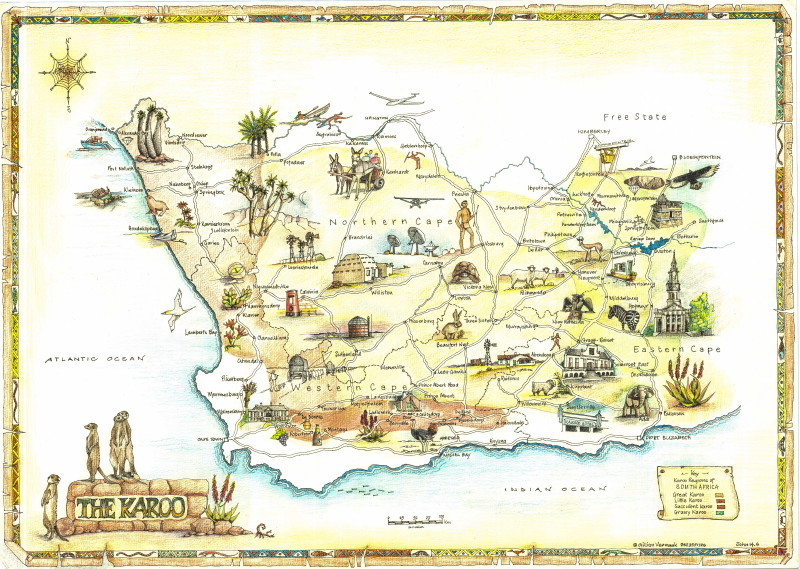 The Karoo is a Palaeontological Wonderland

The Republic of Karoo

9 thoughts on “Karoo – The Beginner’s Guide”