The scrub hare sat dreamily at the end of a freshly dug drainage line, in the shade of a camelthorn. It was late afternoon and March’s summer heat was just starting to ease.

The hare seemed transfixed by the view of dense greenery and red earth and blue sky, the flat-topped camelthorn trees. Apart from a brief glance and flicker of ears in the direction of us sitting quietly the bakkie, it seemed happy to ignore us, a hare in reverie.

As is sometimes the case in a national park, we had this sudden feeling of eavesdropping, of being the voyeurs of a special moment. The hare hopped slowly forward and nibbled thoughtfully on a plant, then sat back again, swivelling its long backlit ears.

Suddenly I felt like Alice, beholding the March Hare. I could easily picture him beckoning me over and inviting me for tea. When he glanced in our direction he really did seem on the brink of saying something. Then he hopped forward again, disappeared behind a small bush and the spell was broken.

Chris started the diesel engine again and we drove slowly on, admiring what the lowering sun lit up. The camelthorns that the park is named for (Mokala is a Setswana word) were dark green and sported their grey velvety seedpods like Christmas ornaments.

In the distance, a trio of giraffes nibbled their way from tree to tree towards us. Then they paused at the edge of the road to see what we were doing, fondly imagining they were invisible behind the leaves.

A little steenbokkie froze as we paused for a picture, its ears like lilies.

Further on, a trio of kudu gazed down on us from atop a krantz, their white mouths looking like they’d all just been at the milk.

Mokala National Park near Kimberley is on the very edge of the Nama Karoo and the Kalahari’s savannah biome, combining the allure of two in one. As is always the case, the edge or crossover zone of two or more biomes is a wonderful place for biodiversity. Here you’ll find 10 distinct plant communities.

The camelthorns and the shepherd’s trees and the waving grasses create glade-like backdrops. The roads vary from dark to blonde and back again. The warthogs sport red Kalahari mud.

Alongside the fragrant Karoo bossies and the Karoo chat and melodious lark, are distinctive Kalahari scenes like sociable weaver nests. 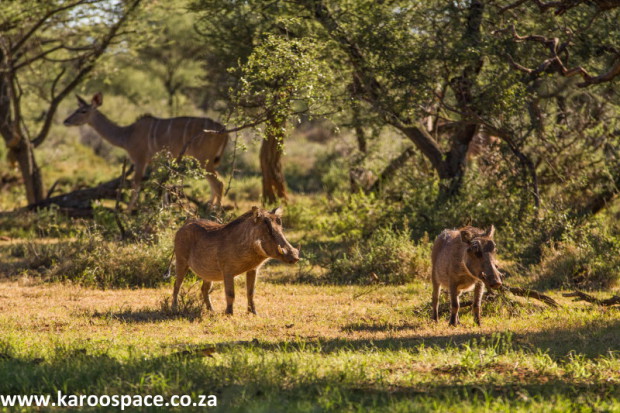 There are dryland beasts like gemsbok and springbok, but also seldom-seen grassland antelope like roan and sable. Bewilderingly, there are also blue and black wildebeest here. Usually the two species are kept apart since they tend to interbreed.

But park manager Deon Joubert says both would have occurred here historically anyway.

Tsessebes are now endangered in South Africa, but Mokala is a great place to see them. They thrive here.

They are by no means the most handsome quadrupeds, but they are the speediest, and entertaining to watch.

March seems to be their jousting season, and it’s a bit like watching a real mediaeval tournament. We came across two and followed them. First they cantered towards one another in a slow stylised manner, meeting on the edge of both their territories. Then they high-stepped beside one another, circling in overlapping patterns, nose to nose, then nose to tail.

It was if they were comparing body parts with one another, and boasting in undertones we couldn’t catch. There’d be a studied intermission of grass nibbling, but all of a sudden the courtly battle would be on again. They’d kneel down and horn the muddy earth and stand. The mudpack made their horns look bigger, a feeling they seemed to relish as they nodded and shook their heads at one another.

A dispute like this can go on for hours, apparently, but seldom ends in violence. In our case, one just stalked off with a slightly aggrieved air and the other saw him off for a short way. They’d probably be doing exactly the same thing tomorrow.

Birders love it that you can see white-backed vultures here – probably the best place to do so outside of Hwange National Park in Swaziland.

So this really is a place of rare and endangered creatures. The buck are comparatively safe here from tickborne diseases and there are no large predators like lions.

There are plenty of buffalo breeding herds here too, all with youngsters practicing their debt-collector stares on visitors.

It is now being picked over by men seeking diamonds.

The land that would become Mokala was found 80km south of Kimberley, was proclaimed as a national park in 2007, and now protects over 28 000 hectares.

“The internal fences between Mokala and the newer Lilydale section have been dropped. Some buffalo and roan went through when we had only 100 metres down,” said Joubert.

“Actually, everything has worked out really well. This terrain includes hills, so it’s far more desirable in terms of increased ranges of habitat. And Mokala is already bigger than Vaalbos….”

A Dog, a Child, and a Small Karoo Town

The Bushman Poison Bulb: Doorway to the Hereafter