If you have become a lover of the Karoo, then the sight of a windpump anywhere in the world will always remind you of the vast open spaces between Oudtshoorn and the Orange River.

Although windpumps look romantic and appear to be low-maintenance, Karoo farmers will tell you it takes hard hands and a mechanical brain to keep those blades flashing, year in and year out.

“I’ve got one or two men who know how to handle a windpump,” says JP Steynburg of Ganora Farm outside Nieu Bethesda. “To me, keeping a windpump turning is one of the most difficult challenges of farming. So when one of them needs fixing, I leave it up to the experts and go off to town for the day.”

Recalls one farmer, who had no fewer than five windpumps on his spread:

“It was always a difficult job to climb up the windmill (sic) tower with a grease bucket in hand and stand balanced high up on the platform while greasing the open gears. Finally, after gears were built sealed in oil, once or twice a year greasing proved adequate and weekly oiling became unnecessary.”

Your Windpump is My Windmill

The word ‘windmill’ accurately refers to a milling apparatus, like the old mills of Holland. People often refer to a Karoo windpump as a ‘windmill’. Perhaps the most precise – if long-winded – term is ‘water pumping mill’. Whatever. A steel flower by any other name would still pump water as sweetly…

By making ground water accessible, the windpump opened the arid areas of the United States, Australia and South Africa to farming and the development of small towns. In many parts of the world, this new source of on-site water allowed for the arrival of the steam train, and all the benefits of rail transportation.

Still Spinning After All These Years

Aermotor, the American windpump company, was founded by La Verne Noyes in 1888, and is still a world-leading producer of windpumps.

In 1928, farmers Wiley and Elizabeth Gooch of West Texas retired to their local town after a life of farming – and windpumps. They took one Aermotor with them and set it up over a well in the backyard of their dorpshuis (town house). Not only did the Aermotor provide them with constant water, it also kept the nostalgia of their life down on the farm.

The varying sounds of the windpump blades seemed to reflect both sides of farming. On stormy nights, says Elizabeth, those revolving blades sounded like “a mad musician banging his brass cymbals”.

On quiet nights on the prairie, the gentle purring of the rotary wheel brought back calming memories of happy family occasions on their farm.

South African windmills: “Wherever you go, you see them. Whenever you see them, they go.” – Author James Walton.

Deep in the folds of the Hantam region of Namaqualand lies the village of Loeriesfontein. To get here from the south, travellers usually drive up from Nieuwoudtville, passing a magical spread of quiver trees lining the mountain slopes to the east.

Windpump museums are springing up all over the world, especially in arid areas like Texas and New Mexico in the USA, and the outback of Australia. The Fred Turner Museum in Loeriesfontein boasts South Africa’s only massed windpump formation.

The first hero in world fiction was Don Quixote (Don Quixote, by Miguel de Cervantes), the famous ‘Man of La Mancha’. On one of his first ‘road trips’ with his trusty servant Sancho Panza, Don Quixote comes across a field with 30-odd windmills – an offshore version of Loeriesfontein, say.

“See, friend Sancho Panza,” he says. “Thirty or more enormous giants with whom I intend to do battle and whose lives I intend to take, and with the spoils we shall begin to grow rich, for this is righteous warfare, and it is a great service to God to remove so evil a breed from the face of the earth.”

Sancho Panza looks all about him and can see no giants. Then he understands what his boss is seeing, and replies:

“Look, your grace, those things that appear over there aren’t giants but windmills, and what looks like their arms are the sails that are turned by the wind and make the grindstone move.”

The Don is aghast at his lackey’s, um, lack of vision, and says:

“It seems clear to me that thou art not well-versed in the matter of adventures: these are giants; and if thou art afraid, move aside and start to pray whilst I enter with them in fierce and unequal combat.”

Don Quixote charges off, tilts at the first windmill, gets caught up in one of its turning sails and is flung, horse and lance and all, across the field.

Tilting at windmills: the act of attacking imaginary enemies, or “fighting the unbeatable foe”. 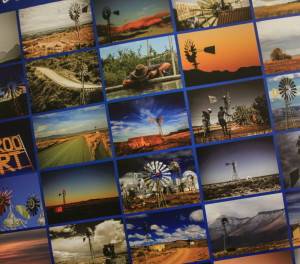 Windmills of the Karoo & Kalahari

The Water Doctor of the Karoo

3 thoughts on “Steel Flowers – Windpumps of the Karoo”