Story and Pix by Chris Marais and Julienne du Toit

Autumn, 2017 – On a warm autumn morning some years back, we’re following Jan Swart and Wilhelm de Lange as they wind through the ramshackle streets of Calvinia West in their Bakes Bakery van on the day’s first bread run through the township.

They’re dropping off boxes of sliced fresh loaves at dozens of little spaza shops all over the place, run by an astoundingly kaleidoscopic mix of God’s children. Want to see the changing face of the South African platteland? Ride along with the Bakes Bakers for some enlightenment in that regard.

Delivering bread out here is a bit of an art. You’ve got to know who owes you money from last week and who has a clean slate today. There are friendly reminders to be issued and, occasionally, stern words to be shared. Most times, however, it’s an amiable exchange of bread and conversation. Life is just too tough out here to be making a fist out of everything.

Golf in the Karoo

It’s just after dawn, yet the kids are out on the streets already. They’re spinning their tops in the dirt, playing a rather complicated stick game of kennetjie and sprinting alongside the van, obviously drawn by the magical scent of warm bread.

We leave Jan Swart and Wilhelm de Lange to their deliveries and follow directions to a cinder block house in the middle of Calvinia West. Living in a caravan in the back yard is the dignified and dreadlocked Steven Charles, who specialises in paintings of the World’s Biggest Postbox, which stands in the main street of Calvinia.

Steven tells us his Rastafarian community is about 50-strong, and that when they need to worship they “go up to the mountains”.

“Like most of the brothers, I turned from the gangs and the drugs and chose the Rasta way,” he says.

Elroy Lombard approaches and greets us. For some reason, everyone calls him Leroy, and that suits him just fine. He’s a self-confessed schizophrenic on a disability grant. Living with the Rastas, just being around them every day, is balm for his troubled soul.

“Steven helps me with my art,” says he. “All the Rastas make sure I take my medication. They inspire me to be more creative and less confused.”

In addition to this rather artisanal but very effective form of art therapy, Steven Charles is teaching a little squad of township boys how to play soccer and golf. In no time he gathers them together and the street becomes an instant driving range as the youngsters grab their second-hand donated clubs, take up their stances on a nearby speed hump and swing lustily away for the camera.

The last time we photographed Calvinia people in the street was when we interviewed the Elvis of Namaqualand, the No 1 Speed Cop in town, Boeta Gammie. He was strumming his guitar and Johanna Jooste, the one-time Riel Queen of the Hantam, was dancing in full spate on a sleeping policeman.

We see a man in the crowd of onlookers wearing a beautiful Rasta jacket of many colours. That’s Jonathan Orlam, the Rasta Tailor of Calvinia.

“Where did you learn this?”

“What were you in prison for?”

This is followed by a few moments of startled silence, as we think on this. Then Jonathan adds:

“I was a brutal man. Then Jah changed my life.”

Five minutes later, we’re at Jonathan’s place down the road, where he rents a bedroom that doubles as his sewing room. When he works, he sits upright at the foot of his bed, in front of a table where a sewing machine and overlocker stand.

At our request, Jonathan shakes loose his dreads and begins to work at a jacket, a beatific, peaceful smile on his face. You can see this is his happy place.

He Paints, He Sculpts, He Inspires

Nearby lives Glen Klaasen the Rasta Painter, who works from a studio-garage.  Glen is a very handy man. He built his own house, he sculpts, he paints. He also fashions wire karretjies for the kids in the neighbourhood.

“I like the youngsters,” he says. “They’re quite witty.”

Glen once painted a portrait of Emperor Haile Selassie of Ethiopia, the iconic Rastafarian figure. It looms large in his garage and he is proud to pose for photographs in front of it.

Across the road from Glen, Martin de Wee and Kane Ockhuys are planting upside down water bottles along the borders of Aleta Matthys’ garden.

“So that when we are once more blessed with rain, we will remember the goodness of the people who kept us supplied with water when we had nothing,” says Aleta.

Calvinia has been a dry town for months because of the drought, the worst in living memory. This is a drought that would stretch way past the biblical seven years, and cause immense pain to farmers and townsfolk alike in the Northern Cape. A local church pastor has led his tiny congregation of 30 out to the parched town’s Karee Dam to pray for rain. Shortly after, a typical Karoo thunderstorm belted down over Calvinia but the deluge was short-lived and the cracks in the dam just widened.

We discover yet another side to the amazing Glen Klaasen after lunch over at Radio Kaboesna 98 Khz FM, a community broadcaster that reaches right up to the barren wastes of Brandvlei, across to Williston and to the west where the many quiver trees live: Nieuwoudtville. He has a two-hour weekly slot, during which he pumps out reggae music and any number of birthday wishes.

“I try to make my show inspiring,” he says. “I read from the Bible, I play the music. Small steps – just so people know there is a way.”

At Blikkiesdorp, the startlingly tidy squatter camp nearby, we meet Frederik Frederiks, who prefers to be called Sampie. It’s clear to see why the camp is called Blikkiesdorp: more than 200 families live in a hopscotch jumble of tin shanties that provide little shelter from the scorching summers and the bone-chill winters of the Hard Man’s Karoo.

Sampie and a group of friends have taken it upon themselves to protect the local women who visit the string of outdoor toilets at night. He says thugs and predators have taken to hanging about the facilities and preying on the women who go there.

Like all the Rastas we meet that day, Sampie is very civic-minded. As one of the Blikkiesdorp founders and chairman of the Hantam House of Judah, one of his pet projects is to get a recycling centre to clean up the place and generate jobs.

“We don’t like people to stand with their hands out.

“Politicians and police, they all think that this is where crime starts,” he adds. “But it doesn’t – lovely people live here. If someone is hungry, we will share our food.”

He recites the Five Points of the Rasta Creed:

“Feed the hungry, clothe the naked, nourish the sick, protect the aged and care for the infants.”

At dusk on a Saturday night in Calvinia West, there’s a buzz in the air. We’ve heard about the dusty yet romantic lovers’ promenade down Eerste Laan, but first we stop off at the home of Ruben Minnies, another ex-con who is now a confirmed Rastafarian.

Ruben currently has fencing piecework in Piketberg, but he and his wife Noka run a little video games room for the local children behind a shop, games with tame names like Snow Balls and Magic Plus. He gathers up his children Nonnas, Novi, Grofen and Judah and they head for Eerste Laan.

Along the way, he tells us:

“I grew up here in Calvinia and became Rasta during a very difficult time, after my father died.”

All the young people in the township seem to have dolled themselves up and are parading up and down the road. We see them through a light film of dust as the evening wind comes off the Hantam Mountain nearby.

Low-slung cars with mag wheels and top-volume sound systems come thumping by. Music blares out from countless homes along the way.

Saturday night in Calvinia West is a time for celebration and romance. The whole township seems to have turned up, dressed in their favourite smart clothes, doing a slow sashay down Eerste Laan with their best friends in tow. One young woman walks past wearing a T-shirt that reads: Justin is my ex.

“Justin Bieber, of course!” she replies, blushing as she strides off in a glorious swirl of flirting, in the direction of the parked old caravan selling fish and chips out of an open window. 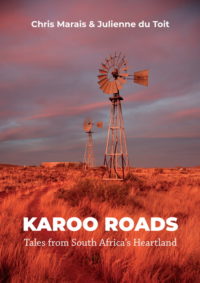 In the midst of all of this we see Sampie and his committee of men returning from the shops. We greet each other in passing.

It suddenly feels like we know everyone on Eerste Laan.

This is a chapter from Karoo Roads – Tales from South Africa’s Heartland, available in both print and Ebook formats. Contact Julienne at julie@karoospace.co.za for details.

A Six-Pack of Karoo Books

Karoo Roads II – At the Printers!

A Snow Day in the Karoo

One thought on “Redemption Songs in the Karoo”