When a Karoo male ostrich with blood-red shins begins to court his true love, it’s a sight to behold.

Monsieur will drop to the ground, spread his gorgeous wings before Madame, and with his head flung back, he will begin to thrum and gyrate, making a loud booming noise. Then, lifting himself on the tips of his toes like Baryshnikov, he will puff up all his feathers and run daintily around the eyelash-batting object of his affections.

If she likes the guy, Madame will modestly lower her head as she walks, shivering her grey wing feathers in approval. She will find a spot, sit down and let the games begin.

Such is the enduring inter-continental romantic lure of the ostrich, its delightful courtship moves, and the gorgeous flightless feathers that line its wings.

Now should you ever need a handy time portal while road-tripping along Route 62 in the Little Karoo, here’s how you get there.

Driving from Cape Town, you head through Calitzdorp on the Oudtshoorn road and continue eastwards for about 18 kilometres. Approaching the Karoo Boom farm stall on your right, look sharp left at the Red Stone Hills.

At the base of those stark crimson outcrops streaked with green algae, framed by tall blue gums and old date trees, is a palace fit for a Victorian-era royal in exile. The domed cupola gives it away.

Instantly, the mind’s eye wanders to an age of cavalry officers in uniform, ladies in big bonnet dresses, horse-drawn carriages in the driveway, and kick-ass parties in the ballroom. With scandal and intrigue sure to follow.

Welcome to Rietfontein Ostrich Palace, the legendary home of the Potgieter family. Now let’s dart through that portal to a day in 1845 and a small clump of wagons outspanned about 200km west of here.

Young Armaans Potgieter is a wagon driver who goes hunting for the pot in his down-time. He returns with an antelope of sorts and a couple of wild ostriches bagged along the way.

Armaans saves the tail and wing feathers of the birds and hopes he might flog them to a passing hide trader (smous) for a couple of pennies. Instead, gold coins fall into his hand along with some equally valuable advice from the smous:

“Buy land and farm with ostriches.”

And that’s how Armaans Potgieter becomes one of the world pioneers of ostrich farming, raising these glorious birds which had been hunted and killed (the lucky ones were simply stripped and sent off naked) for thousands of years before this.

Fashion and the Feathers

In crazy Victorian times, women wore all kinds of dead-bird feathers on their hats, the most popular being ostrich plumes. In fact, if you look carefully at old photographs of various potentates through history, you’ll note that the guys wore ostrich plumes on their ceremonial helmets, and the 12 black horses that pulled the Duke of Wellington’s funeral wagon in 1852 all had clumps of black ostrich feathers on their heads.

Someone simply had to start farming these wondrous birds. You couldn’t just keep killing them off for their wing feathers.

In the first half of the 19th Century, Oudtshoorn was a hardscrabble village described by its detractors rather haughtily as Veldskoendorp – a place of poor man’s shoes. It was officially named Oudtshoorn in honour of a newly-appointed Cape Governor who never made it to these shores – he perished on the sea voyage out.

The 1860s began with a killer drought and ended in the Golden Age of the Ostrich. The ostrich farming frenzy really took hold when one Arthur Douglass invented the incubator in 1869, and production was vastly increased.

Farmers had to find markets for their feathers, and so a host of Jewish Lithuanian feather merchants crisscrossed the Little Karoo as middle-men in this fledgling industry.

Oom Swepie le Roux of Doornkraal Farm east of Oudtshoorn is every bit the baronial storyteller, who comes complete with his own family feather palace and a tasty brand of sparkling muscadel-grape rose called Tickled Pink. The front label sports a running ostrich and the back-label speaks of spicy food, good company and naughty women.

Well into his 80s, Oom Swepie tells the story of his Oupa Gert, his Ouma Maggie, and the various smouse who visited Doornkraal.

“They came for the feathers, the fare, and the brandy cellar,” he says. “They would arrive from their dusty journeys, and Ouma would make them bathe first. She was also a devout Christian whose life’s ambition was to convert at least one Jewish pedlar, so she’d make them attend a service before dinner.

“After supper, Oupa and the smous would go down to the brandy cellar, light the lamps, share a drink and discuss the feathers, laid out for inspection. Then the haggling would begin.”

Oupa Gert may have prospered from his lamplight negotiations but Ouma Maggie, they say, had no luck converting the smouse.

There are ostrich palaces scattered about the Eastern Cape, but they really do seem to have a nest in the Calitzdorp-Oudtshoorn-De Rust district of the Little Karoo.

Back in the heydays of the ostrich industry, when a prime wing feather was worth more than its weight in gold, the new dry land millionaires wanted to tell the world of their riches. The Feather Boom Nouveaux Riche set had massive mansions built of local sandstone, sparing no expense on architectural shout-outs like turrets and parapets that served no practical purpose. Suddenly families had to have ballrooms, homes with 20 bedrooms, and coach houses, all built in an eccentric froth of styles that drew from the Edwardian, Tudor, Elizabethan, and Victorian eras.

The two architects who made serious names for themselves here were Charles Bullock and Johannes Egbertus Vixseboxse. You see their handiwork all over Oudtshoorn, in the form of mansions that have been re-purposed into old age homes, museums, little businesses and, of late, guest houses.

Dining rooms for 100 guests, marble baths that held 1 500 litres of water, Italian ceramic tiles around the fireplaces, mahogany inlaid libraries, Carrara marble in the kitchen, Delft and teak fancies, broekielace (cast iron railings) and burnt bricks, endless verandahs, stained glass windows, big lion carvings and other expensive doo-dahs from all corners of the Earth – it was not the Age of Minimalism. The diamond magnates of Kimberley and the gold barons of the Witwatersrand stood back in envy.

You can only imagine how the Mail Order Catalogue business flourished in those days, how goods-laden ships flowed endlessly back and forth between continents while ostrich baron bank accounts just grew fatter and fatter with every plucking.

Adventure on the Niger

This saga of the South African ostrich industry comes with its own exotic adventure story, worthy of an Indiana Jones film or an Allan Quatermain classic.

Despite all these profits, the ostrich farmed in the Little Karoo was just so-so. It simply did not possess the ultimate plume quality to match that of The Barbary Bird, found somewhere in North Africa. There was a need to enrich the South African breeding stock with the Barbary, to give the locals an edge over their rivals, the USA. The magical feather everyone was after went by the name of Evans-Lovemore. It was blunt, strong and double-fluff dense.

So a small and discrete party, led by Russell Thornton of Grootfontein Agricultural College in Middelburg, set out in September 1911 on a steamship up the Niger River in the general direction of Timbuktu.

A couple of train journeys later, they were based in Kano, Northern Nigeria. They offered a reward for a sample of the Evans-Lovemore, located a likely source from Fort Zinder in French Sudan territory, recruited more than 100 porters, kept an eagle eye out for Tuareg raiders, and hit the desert with gusto.

Thornton begged the French fort commander at Zinder to allow them to export some of the indigenous ostriches. The answer was a firm non, and so they returned to Nigeria and put out a general appeal for Barbaries once more.

Ostriches from all over the region were presented to the South Africans and gradually, bird by bird, they gathered a flock of Barbaries to take home. Nearly 150 specimens were carefully trucked back to the coast and shipped down to South Africa. Thornton was hailed as a local hero, the SA breeding herds were enriched and the Americans were full of envy.

In fact, so entrenched was the South African grip on the ostrich trade that, when The Titanic sank in 1912, part of its most valuable on-board cargo was a shipment of our feathers bound for New York markets, insured for millions of dollars.

The next two years of Oudtshoorn’s rather eccentric existence can be described for millennials as the old-time equivalent of the dot.com billionaire boom of Silicon Valley, California. The prime feathers from three ostriches could buy you a Model T Ford. One really perfect plume could be traded for a Union-Castle berth from Cape Town to Southampton. It was The Great Gatsby before The Great Gatsby.

Bullock and Vixseboxse went into overdrive, servicing the architectural whims of the various ostrich overlords and their bigwig wives.

In 1914 it all came crashing down. World War I turned the globe away from the light-heartedness of party feathers; the open-top automobile made the wearing of big hats impractical, if not downright dangerous; it became a mark of shame to wear any body part of a bird on your head. It was the inevitable perfect storm of misfortune for this vanity-based industry and its kingpins. In so many ways, the carnival was over.

It was recorded that one feather dealer had a cheque for 100 000 pounds honoured by his bank in early 1914 and a cheque for one pound rejected the next year. There were suicides, bankruptcies, mysterious disappearances and empty mansions on the Karoo veld.

In the past century since the Feather Fall of 1914, the ostrich industry has had a rollercoaster ride consisting of a resurgent plume market, a growing taste for ostrich meat and a wider use for ostrich leather. And do not discount the ongoing boom in feather dusters.

Bird flu scares and European Union bans have come and gone, and the present southern African drought has also added to the decimation of the formerly vast ostrich flocks of the Little Karoo.

Now, however, the industry shows signs of innovation. The Klein Karoo Ostrich Emporium in Oudtshoorn has an extensive workshop where crafters fashion a variety of ostrich goods. Ostrich show farms like Safari, Highgate and Cango tell the big bird story every day to busloads of tourists from everywhere.

And the palaces are being spruced up again. At Rietfontein, where it all began, you can stay in elegant accommodations within spitting distance of the old feather mansion and be hosted by Kobus Potgieter, descendant of The Original Armaans, and his wife Elmarie.

The Rietfontein flock has been reduced to one rather feisty male and his two wives in a paddock out back. But they do a really good job of representing their legendary species, and the memory of their many flightless ancestors.

This is an extract from Karoo Roads – Tales from South Africa’s Heartland, by Chris Marais and Julienne du Toit (MLM Publishers, 320 pages, 201 black and white images, 1 Karoo Map). To purchase, either order from HERE or email julie@karoospace.co.za for details. 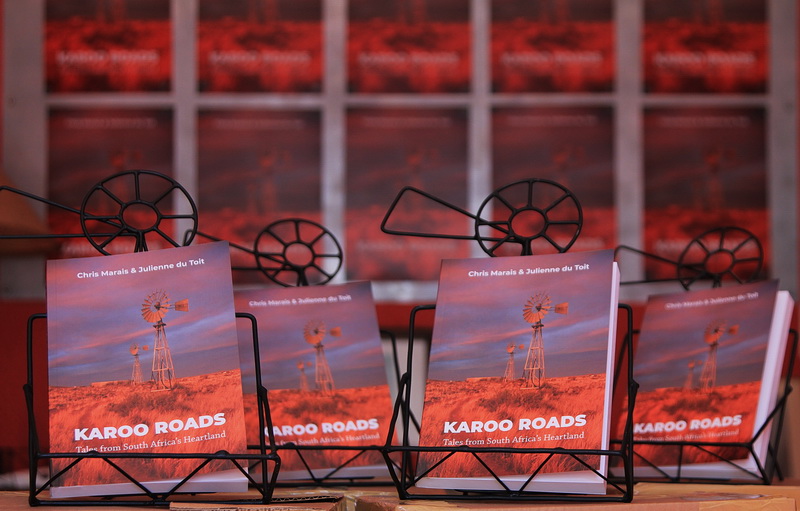 Pelargoniums of the Karoo

Legends of the Cradock Club