Story and Pictures by Chris Marais

There are all sorts of reasons for not being on a lonely Karoo road after dusk.

Huge cross-country trucks with sleepy eyes behind the wheel suddenly appear in your lane. A little bakoorjakkals (bat-eared fox) becomes roadkill in your headlights. A mid-winter kudu smashes into your windscreen with disastrous results all round.

Or a ghost appears out of the inky blackness and then what? I tend to roam the Karoo by day and park indoors at night, which is probably why I’ve never really seen a spectre while sober. But, simply judging by legend, one knows they’re out there. 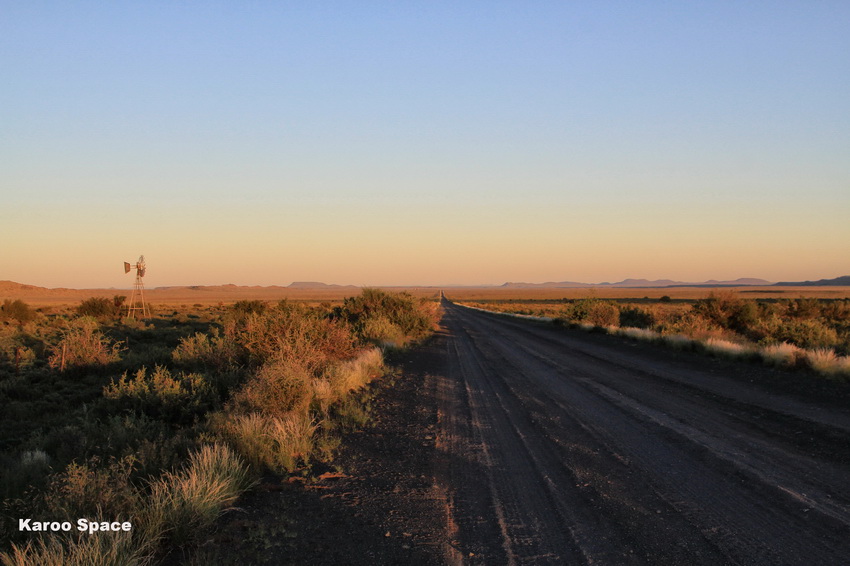 After Dark in the Central Karoo

The earliest recorded Karoo roadside encounter with the departed goes back centuries to the lonely Spokeveld region between Ceres and Beaufort West. Which, not for nothing, is also known as the Murderers’ Karoo.

There’s said to be a transport wagon eternally crossing the sparse veld, drawn by “14 wide-eyed mules” and a driver with a look of utter madness on his face. If you ask him where he’s going, he’ll scream back:

Near Beaufort West, a man killed his wife in a dry riverbed, and since then travellers report seeing a swift-moving light sweeping backwards and forwards along the river-course. They say it’s the ghost of the murder victim, furiously searching for her husband.

On the N1 between the village of Matjiesfontein and the famous graveyard where many men of historic note are buried, motorists have seen a British soldier in Khakis and blood-stained bandages standing at roadside.

Another traveller approaching the graveyard at sunset one day heard a lone set of Scottish bagpipes. When he arrived at the cemetery gate all was Karoo-still in the gloaming. 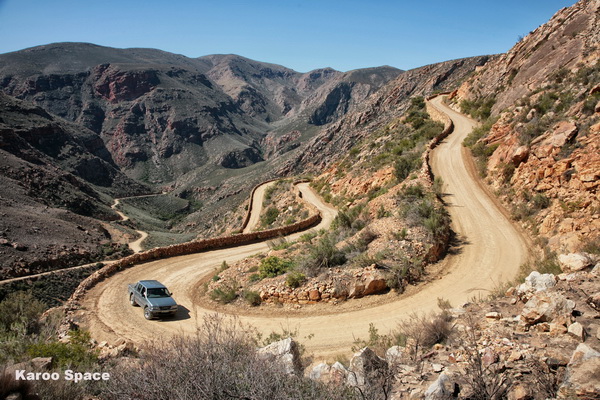 Ghosts of the Swartberg Pass

Karoo mountain country is where you also find some of the best ghost stories.

The Western Cape Karoo’s Swartberg Pass that curls up and up into the heights overlooking one of the most scenic and enterprising of all Karoo towns, Prince Albert, boasts at least three ghostly legends.

The pass itself, linking Prince Albert to Oudtshoorn, is a masterpiece of road-craft. Built by Thomas Bain and a couple of hundred convicts, it has never been tarred. Its only real enemies are the periodic storms and floods that sweep through the Swartberg mountains.

But the build, completed in 1888, claimed the lives of many convicts and at least one guard. A gang of 30 workers died in a snowstorm when the roof of their hut caved in. As you pass the spot, you might feel a sudden drop in temperature.

Just before you turn off to De Hel is where a convict guard accidentally shot himself – his remnant spirit still haunts the site. And the cries of a little travelling family that died in a blizzard can sometimes be heard on the wind. 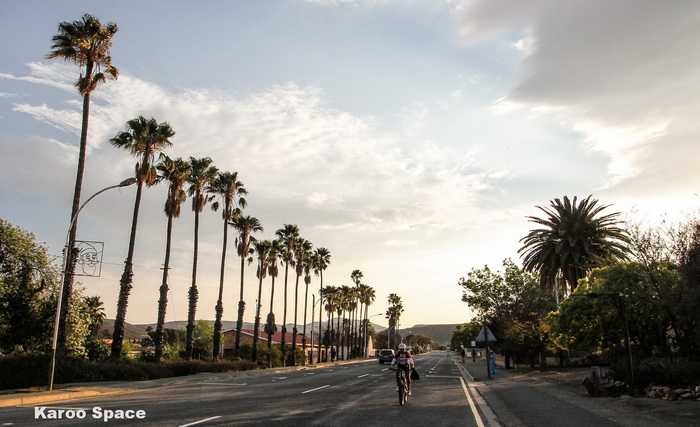 Down Route 62 near the twin villages of Amalienstein and Zoar is the turn-off to the Sewe Weeks Poort Pass. Watch out for the Toll Keeper Ghost if you’re out there at night. He runs into the road and tries to flag you down. Legend has it that the Sewe Weeks Poort Pass was once the mountain haunt of cutthroats, thieves, smugglers, outlaws and general miscreants – who obviously never bothered to pay the rather anxious toll keeper for passage.

When you’re driving past Uniondale, the little Karoo town set in the Kamanassie Mountains, try not to give anyone a lift, especially if she’s a young woman.

One Maria Charlotte Roux died here in a car accident in 1968. Since then, there have been many reports of a night-time hitchhiker who climbs in your car, sits for a while and then simply vanishes. 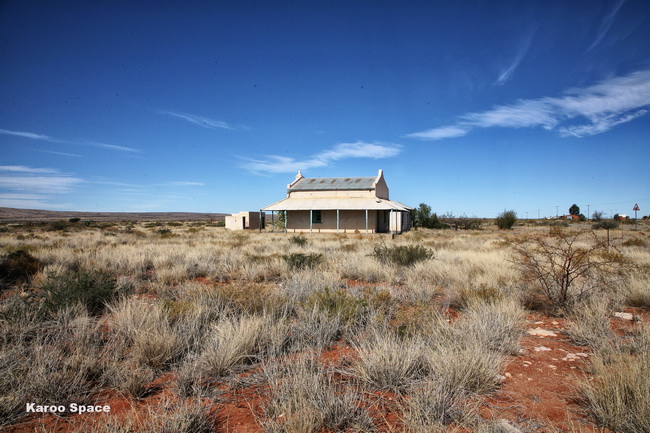 Another favourite daytime occupation of mine is wandering around a ghost town in the Karoo. There’s usually a broken-down railway siding, ruined residence or two, perhaps the remains of a hotel terrace or an empty swimming pool around.

On the N10 up to Upington in the Northern Cape, you’ll find turn-offs to both Putsonderwater and Draghoender. Both were once thriving railway communities in the southern Kalahari, and there are still people in the district who remember the parties. It’s only when you walk around a pile of bricks and wonder who lived here and why, that you really begin to understand the value of narrative and legend.

One would think cemeteries were sad places that present an off-chance of zombie encounters.  In the Karoo, a graveyard is nothing more sinister than a serene and spellbinding House of Stories. 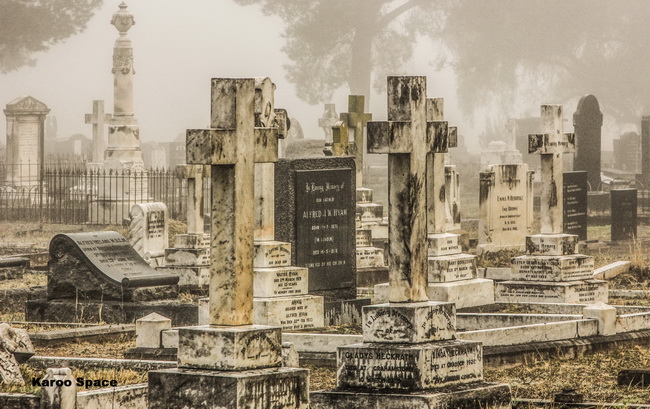 Cradock’s ‘Valley of the Stiffs’ is packed with a war general, a Polar explorer, rugby fanatics, a famous astronomer, rows of deceased nuns, a substantial Jewish presence and a lucky chap who was laid to rest by the local Sober Society.

Karoo museums are notorious for their dusty old dioramas, lifestyle displays from the Victorian era and dilapidated collections. But if you know your spooky stuff, you’ll realise that they are perfect for hauntings.

He says he shares his office with the ghost of a little boy wearing a pale shirt.

“He once walked right through a wall and kicked me here, in the leg. But now he doesn’t bother me, and I don’t bother him.”

Ghost towns, museum spectres, graveside spirits, roadside wraiths and mountain hauntings might abound here in the Karoo, but they’re nowhere near as popular as the faithful old hotel spook. 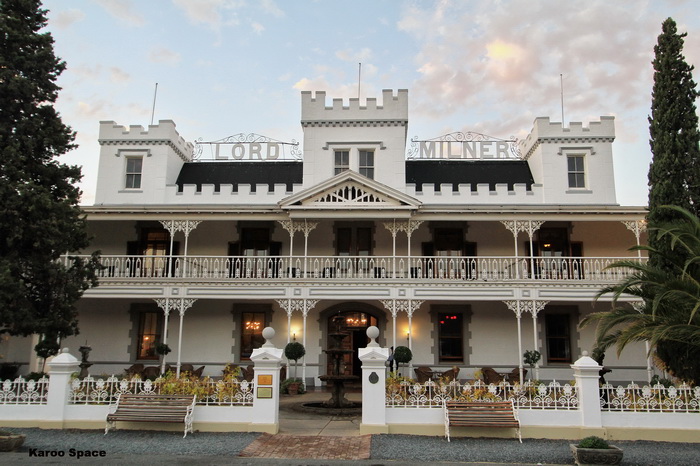 Rest assured: a Karoo hotel apparition is rarely malignant. A bad ghost is not good for business. A ‘shiver down the spine’ maybe-perhaps ghost is possibly the best marketing tool around.

Of course, the Lord Milner Hotel in Matjiesfontein has the most intriguing hotel ghost stories. Topping the list is the tale of Kate the Nurse, who used to play card games like Beggar My Neighbour and Cribbage with her patients during the Anglo-Boer War, when the hotel was a temporary convalescent home for Brit soldiers.

They say she sometimes stares down from a turret, and that you can occasionally hear her shuffling cards late at night.

At the Swartberg Hotel in Prince Albert, ghosts are said to inhabit two Victorian-era landscape paintings.

If you can sense these things, you will see a woman’s glare that wasn’t there before, and a pond slowly turning blood-red. 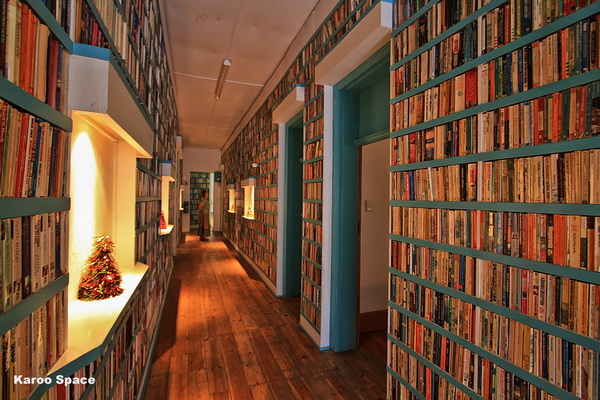 In the legendary little Free State town of Bethulie, there’s a ghost with literary leanings wandering the passageways of Anthony Hocking’s Book Hotel.

Hocking owns more than 150 000 books and a monster vinyl collection.

“Indeed, we have a hotel ghost,” said Hocking. “But it’s really not that frightening. People have just noticed it walking away from them.”

Many years ago we met up with Dr Peter le Seuer at the Memorial to the Honoured Dead in Kimberley for a sunset sherry and an unforgettable ghostly tour.

“This town has 126 haunted sites,” he said. “Not including the Magersfontein battlefield.”

Dr Le Seuer spoke of the different types of spooks that exist (or not) in this world (or the next): astral projections, a recently departed loved one, a mischievous poltergeist and the haunting ghost that appears when the metaphysical environment is suitable. 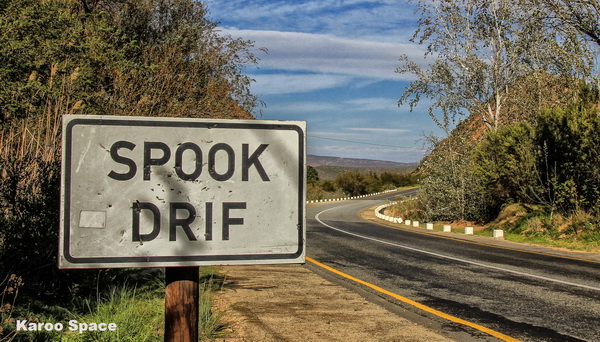 You sometimes find Karoo house ghosts with impeccable manners, like the feisty Mrs Visser of Jagersfontein in the southern Free State.

It was her overseer, a Mr de Klerk, who discovered a 50-carat diamond in a dry old stream bed on the farm in 1870.

After that, the world came to Mrs Visser’s front door in the forms of fortune seekers with the diamond rush glint in their eyes. Mrs Visser sat on her stoep and collected two pounds a month from each digger, who would then have prospecting and mining access to 20 square feet of her property.

For many years, everything that happened in Jagersfontein occurred “by the grace of God and Mrs Visser”. And it seems the wilful widow still likes to keep an eye over things.

Current owner of “The Visser House”, Jill Barnard, once confirmed to us:

“She inhabits the sitting room, where visitors’ hair stands on end at times, even when they nothing of her existence. My Yorkie barks at her, and she’s been seen kneeling before the fireplace and eating a solitary dinner at the dining table.” 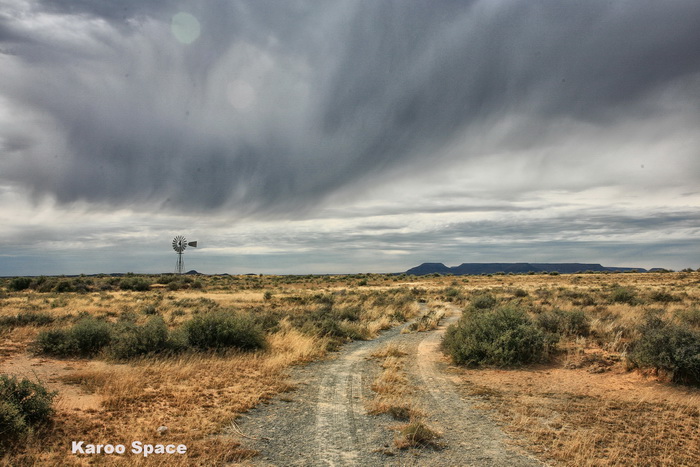 But in-house ghosts are not always that polite. On a farm outside Uniondale shortly before the Anglo-Boer War, a poltergeist targeted the farmer’s niece, a certain Miss Meyer.

After supper one night she went to bed, blew out the candle and suddenly woke up with her hair tied around the bedpost. Her yells of terror roused the others in the house.

Miss Meyer’s hair was loosened, she was settled back in her bed and the candle was extinguished. Suddenly she screamed once more, a match was struck and lo! there were her tresses, firmly wrapped around the bedpost.

“Three of those present saw the spook,” eyewitness C.H. Basson told Eric Rosenthal who recounts the story in his book, They Walk in the Night.

“They say it resembled a phosphorescent crab with two huge pincers. They saw it floating about the room, touching here and there. On a former occasion it assumed the form of a skeleton hand with two fingers.” 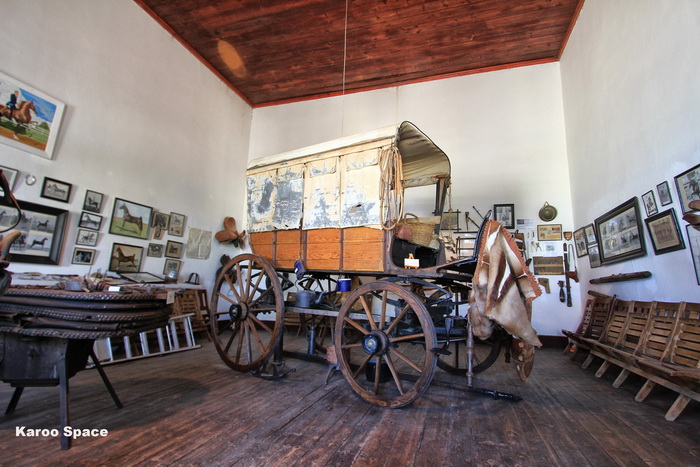 Heading north-east from Uniondale, we follow the Merry Ghost Trail to Burgersdorp and the tale of the Feisty Fire-Irons.

It happened at the home of a Mrs Anderson, as she and some guests were relaxing at the fireside with a sherry one night.

2 thoughts on “The Haunted Karoo”