Consider the Karoo, South Africa’s dry yet unforgettable heartland, as one of those old-time lucky packets that kids used to buy at corner cafés.

The place is literally crammed with all sorts of delights and surprises. You just need to know where to look, who to ask and when to go, before heading off on a trip into the hinterland.

And that’s where we at Karoo Space step in, with our Sixpack of Karoo Books, specially designed to help you find your way around the region and appreciate its offerings.

Here are a dozen random insights to brighten up your Karoo journey: 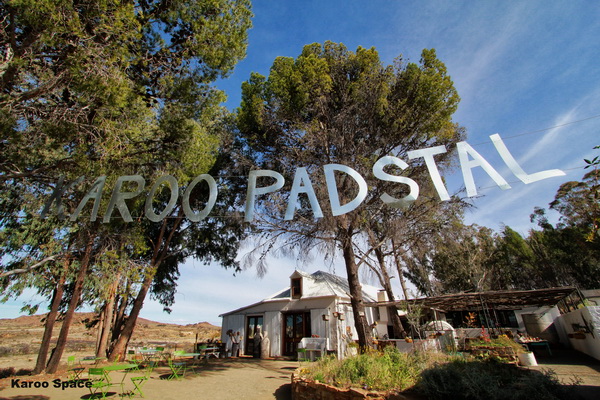 When you walk into a platteland padstal (farm stall) you’re treated to a local slice of life. The food on offer is a variety of preserves, jams, chutneys, dried meats, sit-down meals and takeaway specials – mostly prepared by farmers’ wives living close by.

Each padstal worthy of the name has its own specialty food item that comes with a secret recipe. This could be a bag of biltong, a delicious pie, a slab of nougat or a bottle of something with a catchy name. Just so you remember that particular little spot once you’re home again. 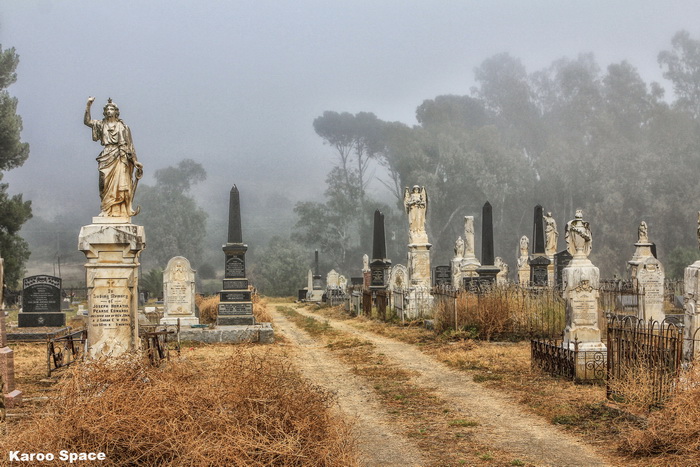 One of the most atmospheric cemeteries in the Karoo holds the remains of a famous astronomer, Anglo-Boer War soldiers from both sides of the conflict, a Polar explorer, victims of the 1918 ‘Spanish Flu’ and one Harry Potter, who lies buried here alongside his wife. 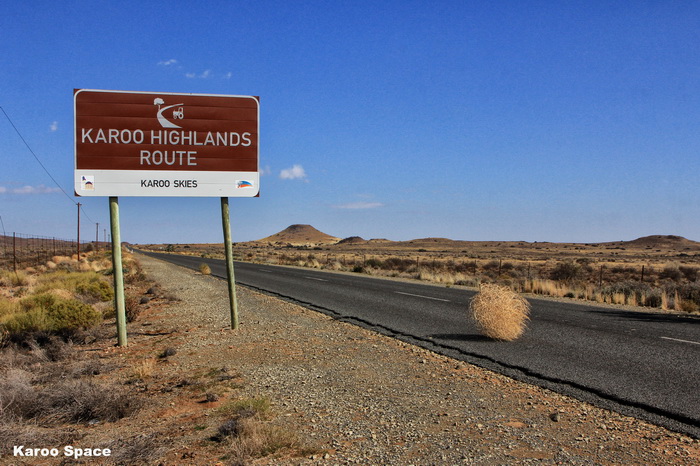 From Somerset East, you head west to Graaff-Reinet and then Murraysburg, hopping over the N1 to Victoria West, then Loxton, Carnarvon, Williston and, finally, Calvinia. 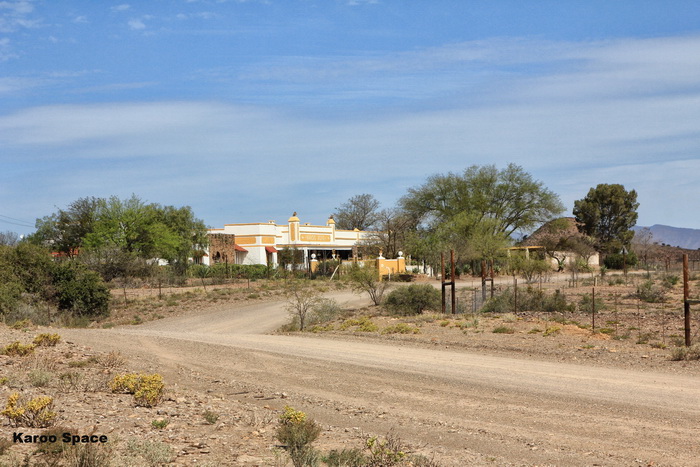 The little village of Steytlerville is a quiet, dusty settlement in the lee of the Baviaanskloof.  Just outside town is the beautifully restored and reinvented Karroo Theatrical Hotel, complete with saucy Saturday night cabaret acts.

“It is as fantastic as Sun City but intimate and insane. As remote as Pofadder but with style and a great sense of fun. It is as hip as the hippest spot but twice as cool.” 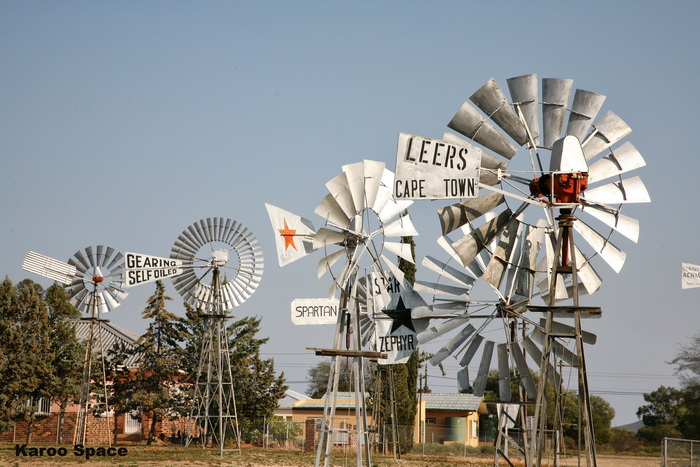 The Steel Flowers of Loeriesfontein are busy today. There’s a stiff breeze coming up from Cape Town and the blades are spinning. You’ll seldom see a Canadian North model spinning on the Karoo plains anymore, but here it is, pumping water like gangbusters. The Star Zephyr swings proudly in the breeze, catching the light of the sun. The Conquest and the Gearing Self-Oiled and the Dandy creak out a mournful dirge in rusty harmony. A few seasoned veld warriors shift restlessly against the chains that hold them motionless, head tied to tail. It seems they want to join the conversation.

Walk around the Fred Turner Museum grounds and you will find many of the other wind pump brands that helped to open the Karoo and Kalahari for settlement: Massey-Harris, Leers, Spartan, Atlas, Wonder, Springbok, Beatty Pumper, Spilhaus & Co, Eclipse, Fairbanks, Malcomess, Vetsak President and the ever-popular Climax and Aermotor. 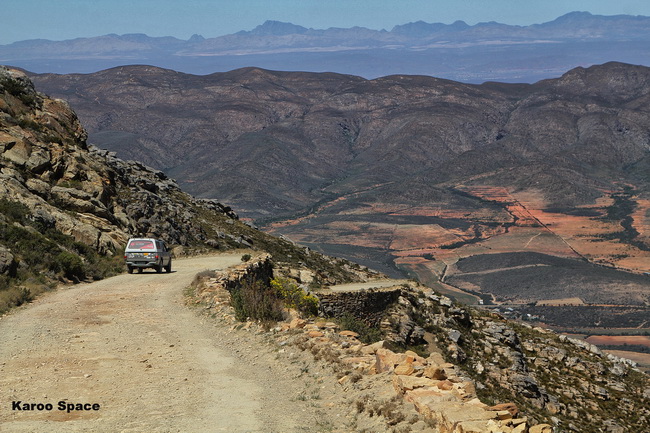 With a gang of about 200 convicts, a whole lot of pickaxes and gunpowder, Bain tackled the job. He finished ahead of time and, Scotsman that he was, economically under budget. The basic dry stone walling his convicts erected in 1886 miraculously remains intact to this day. 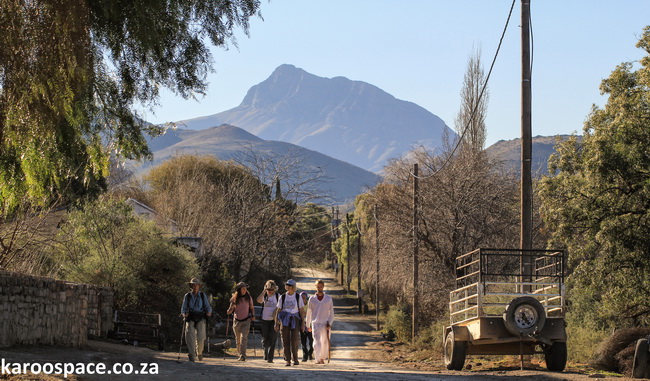 The tallest peak in the Karoo Heartland is the Compassberg, which looms over the village of Nieu-Bethesda in the Sneeuberge, but is visible from as far away as the Wapadsberg road between Cradock and Graaff-Reinet.

It stands more than 2 500 metres high and was so named in 1778 by Robert Jacob Gordon and Governor Joachim van Plettenberg. They reckoned that, from the top of the Compassberg, you could see forever into the Great Karoo. 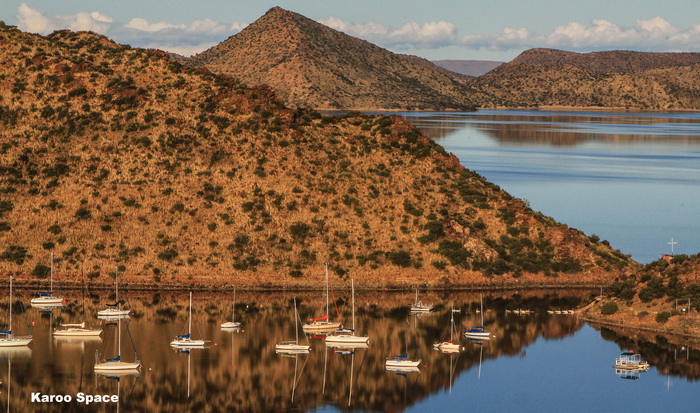 It seems a crazy idea to have South Africa’s biggest stored water resource in the middle of a desert. But the job of the massive Gariep Dam is to gather and distribute the waters of the country’s mighty Orange (Gariep)River. From its source in the Lesotho Highlands, where average rainfall is 2 000mm a year, the Orange swings west, crossing the open dry prairies to empty into the Atlantic at Alexander Bay, where the annual rainfall barely amounts to 50mm. 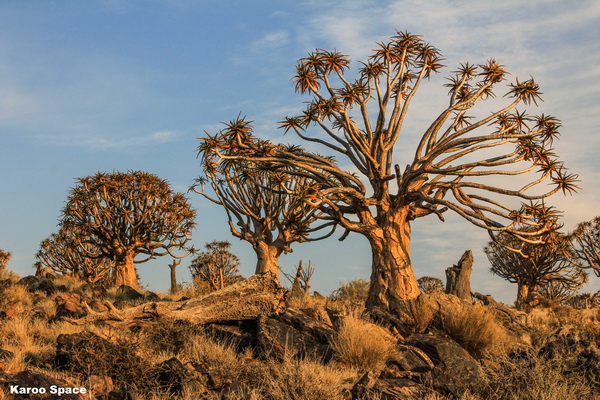 There are two quiver tree forests in the Northern Cape: one is south of Loeriesfontein and the other west of Kenhardt.

On the ridge lines they stand with arms wildly splayed, frozen in place, as if waiting to say their lines from some epic drama.

Every treelike aloe has its own identity and beauty, a profound and reverberating presence, a survivor’s spirit that shimmers like beaten copper. Some are carved and twisted by sun and heat. Others stand on the brink of cliffs, relishing the cooling updrafts. Many are old and golden; a few are pale and young. Most have a bronze fissured bark that glows at dawn and dusk as if lit from within. All have pale forked branches and sage green hands holding up the blue sky. 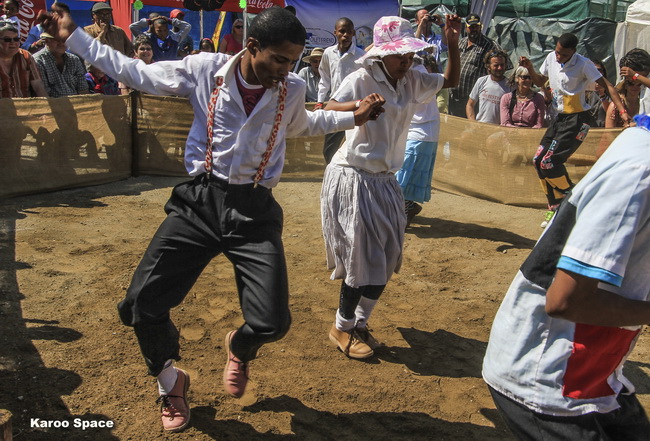 This is no Five-Step Waltz, no Quadrille and by no means a Cakewalk. It’s more like a Cactus Tango or a Dusty Jitterbug, this Nama Riel dance they do so well out here in the Northern Cape Karoo. It’s Stomp the Yard in Calvinia, Williston, Brandvlei and beyond.

The cheering crowd forms a square over a carefully prepared piece of Dry Country. There must be dust, and heaps of it. The wild, twangy Riel music blares out from somewhere and the groups of dancers enter the arena, flailing their arms and kicking their legs.

“Die stof moet voor jou loop,” they say. The dust must rise before you. That’s just the start of a decent Nama Riel.

Variations of the Riel were performed for centuries by the Khoi and San. Later, farmworkers and sheep shearers all over the far-flung outposts of the Northern- and Western Cape danced the Riel. This wild and unique dance lost its lustre for a while and was in danger of being a forgotten cultural relic. 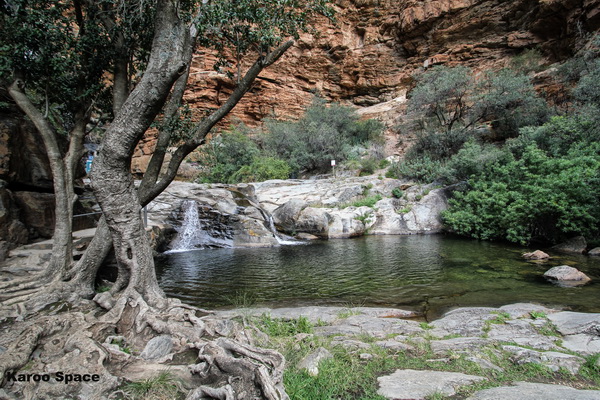 Everybody loves a ghost story, and they’re especially valued in the Karoo. This is, after all, a wide-angle world of lost spaces, unidentified flying objects, a roadside flash of faces in the night – and total mystery.

The Prince Albert Painting Ghost, the Uniondale Roadside Ghost, The Swartberg Pass Ghost, the Matjiesfontein Hotel Ghost, the Beaufort West River Ghost and the Pool Mermaid of Meiringspoort are but a few of the spectre stories of the region. 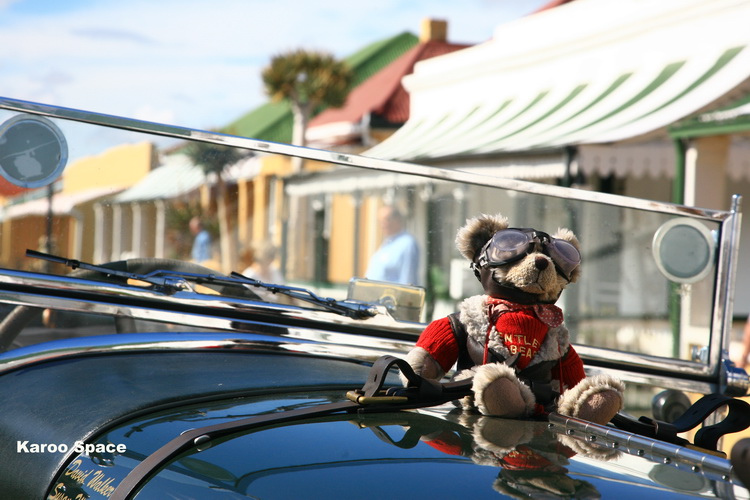 You see them gathered in their custom-designed clusters outside Die Tuishuise & Victoria Manor Hotel in Cradock, on the grand highways of the Karoo Heartland and, occasionally, on a dirt road in the back of beyond.

It’s Slow Travel at its classic best, which is the only way to really experience the Karoo.

Karoo Keepsakes II – on the coffee table next to its brother;

Moving to the Platteland: Life in Small Town South Africa – an all-embracing how-to for successful semigration from the city;

Karoo Roads II – the other book at your bedside.

One thought on “The Karoo – Know Before You Go”