It feels like we’re off on a secret meerkat assignation. At the reception desk of De Zeekoe guest farm outside Oudtshoorn, the lady gives us instructions for our planned encounter.

In the morning, long before dawn, we will be meeting Devey Glinister, our meerkat guide, at the intersection of the George and Oudtshoorn roads. And he’s expecting us.

So in the dark starlit hour before sunrise, we pull up behind pale Chevrolet bakkie. It has a little statuette on the dashboard, a large feather and a pennant that says ‘Jesus’.

A good-natured Devey welcomes us, his signature hat pulled firmly over his ears. Soon other cars arrive, each one pulling up and then sending an emissary to find out if this is indeed the right place.

We strike up a conversation with an Australian couple. They and their two children are doing the classic South African trip – Kruger, Addo and the Garden Route. They’ve had thin pickings in Kruger, reports the father, but Addo has blown them away with incredible lion and elephant sightings. They’re from the balmy Brisbane coast, and the Karoo autumn chill feels icy to them. They shivers in their jackets and hug one another for warmth. A bit like meerkats, really.

After a few minutes, Devey ticks off the last expected vehicle and we follow him on the R62. Soon we all halt to go through a gate which is carefully closed behind us. A few short minutes later, we park in a circle near a tree and Devey drops the tailgate of the bakkie as a prelude to offering the breakfast of champions: coffee and rusks.

It is still semi-dark, but we can see each other clearly in the light of the setting full moon.

Soon it’s time to head off. Devey tells us he spent the late afternoon with the meerkats and knows which burrow they’ve gone down. He also tells us that this labyrinth of burrows is at least 300 years old, and has been inhabited by successive generations of meerkats, probably continuously.

It’s a mercy they’re still here. This particular habitat was nearly demolished to make room for an additional landing strip in the feverish build-up to the Fifa World Cup.

The reason the meerkats love it here is because of the north-south ridge, the only one for kilometres around. Meerkats will typically burrow on the eastern side of such a ridge. It means that when they get up, they have a long piece of land to forage on, bathed in the warmth of the rising sun.

These little creatures are practically solar-operated, as we’ll see.

Devey asks us all to take a folding chair from the large closed drums under the tree, and we walk, first along a road, then into the veld. Devey takes us to the den’s opening and arrays us in a semi-circle with our backs to the sun, which slips above the horizon just about then.

But Devey says they won’t come to the surface just yet, because there’s a shading row of Karoo bossies in the way. In the meantime he tells us about meerkats, telling us that although these particular ones are habituated to humans, that doesn’t mean they’ll be all over us. They’ll tolerate humans at a distance of 10 to 20 metres, as opposed to the more normal 200 metres. At most they might sniff our boots, he says.

At the very second that the sun hits the edge of one of the burrows, the first meerkat is out, quick and upright as an exclamation mark. This is Nicky. She is always first sentinel.

She stands up on her toes, leaning back slightly on her kickstand tail, and offers her tummy to the sun. On her belly is a darkish patch of hair that Devey calls the meerkat’s solar panel. Meerkats don’t have fat reserves to warm them up and keep body temperature up in the optimal mammal range. So they’ve adopted the habits of the cold-blooded creatures, first absorbing heat and energy directly from the sun.

Devey shows how very sensitive this belly solar panel is. Manoeuvring around, he casts a tiny shadow on Nicky’s belly with his hand. The very second the shadow falls on her, she slides away, back into the sun.

Another youngster joins her, swivels round and faces the sun like her. An irresisitible African image – meerkat silhouette. Then a third. They are clearly a little startled to see us there, but not dismayed. They merely watch us carefully for movement. Meanwhile, more and more meerkats keep popping up from underground.

Devey says that like humans, some meerkats are the early birds and others like to sleep in a bit.

He adds that they have a kind of photographic memory. The last one down will be the first one up and then scan the scenery to make sure nothing has changed.

Their eyesight is similar to ours – they can see a similar distance. But their eyes are far more sensitive to movement because they’ve got binocular vision. They don’t focus on only one thing – they can’t. They’re always seeing everything, or most things, says Devey.

This furry group stand clustered together, contriving to cuddle close yet still expose maximum belly space to the sun, standing straight up as skittles.

Their dark eyes gleam as they scan the veld, uttering small chittering comments. They look up and around and to the sides, always returning to gaze at us.

Nicky sings the watchman’s song. The steady peep, uttered every few seconds, lets the group know that all is well.

Up comes Liefie, the female that was the original remaining habituated meerkat in the clan, which was then left alone for a long time before Devey started taking visitors to her group. She required lots and lots of sweet-talking, hence the name.

Then up comes the grumpy Moaner. He joined this clan from another one, and thinks these human encounters are just outrageous. He never fails to make his peevish feelings known.

Eventually all 15 are up.

Eye on the Sky

A crow flies overhead and all the meerkats swivel their heads to peer at it nervously. Meerkats are slightly obsessive about anything with wings and have three different alarm calls for various airborne threats.

They also don’t like aircraft at all, and will watch the PE to Cape Town flight, or the ones out of George with airs of grave misgiving. They class them right up there with sinister Verreaux’s eagles.

Suddenly, all the meerkats seem warm enough to move. A few scamper towards the long ridge, and we follow at a respectful distance.

Now is the time they re-establish bonds with grooming and little play-wrestling bouts. This is a morning ritual to enforce who is who in the top meerkat and who is the bottom, and who is who all the way between. The way you enforce rank on a meerkat is to pee on it. So the top meerkat smells excellently fresh. The bottom-ranked meerkat reeks of every other meerkat.

The youngsters are now a few months old. They have to learn almost everything about hunting and surviving predators from their parents and ‘baby-sitters’. The babies must learn to run for their lives from a very young age. They are considered tasty snacks by snakes, mongooses, lynx, and jackal. And of course, those ever-present aerial predators, the eagles.

Meerkats in turn eat snakes, mice, lizards, crunchy beetles and scorpions. Now, having established who fits in where, they turn to hunting their prey on the long eastern side of the ridge.

We watch as little puffs of dust rise into the air as they scrabble in the dirt, then move on. Sometimes next to one another, sometimes apart. Sometimes standing upright, sometimes on all fours. Tails up, tails down.

All the while, the sentinel sings her soothing song. All is well.

They’ll travel up to 3km in a day, hunting for food, and it’s time to leave them to it. A Scottish man comes over and gives a bemused Devey an effusive double-hand shake.

“You’ve fulfilled the dream of a lifetime. Thank you.” 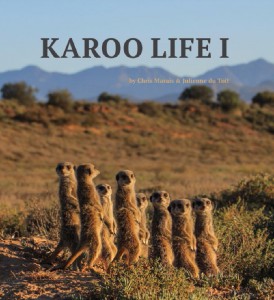 This is one of the timeless stories in the Karoo Life Three-Part series of Ebooks available HERE at a Special Price.

The Quiver Trees of Kenhardt

Fly Fishing in the Karoo