Story and Pix by Chris Marais

The Karoo Heartland region of the Eastern Cape is a summertime playground for foreign and domestic travellers who come in all shapes and sizes.

You’ve got your overland bikers, families looking for new and affordable destinations, groups of farm-to-farm MTB riders, lovers wanting weekend hideaways and just about anyone else with a taste for adventure and the occasional wide open space.

The frontier river town of Cradock is one of your must-do stop-overs on a journey through the Karoo Heartland. 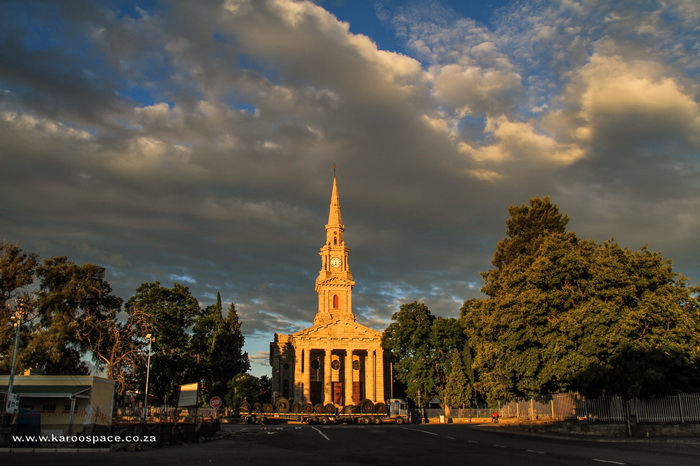 During the Anglo-Boer War, the Moederkerk was used by the British as a lookout. War correspondent Edgar Wallace reports in New Zealand’s Evening Post in October 1901:

“And so the roof of Cradock’s pretty church was garrisoned, and a man in khaki wagged a flag from its steeple, and sober businessmen shut up their shops and ran a ‘pull-through’ through their rifles, and the man who at 9 o’clock was serving out butter, was at 10 o’clock serving out ammunition…” 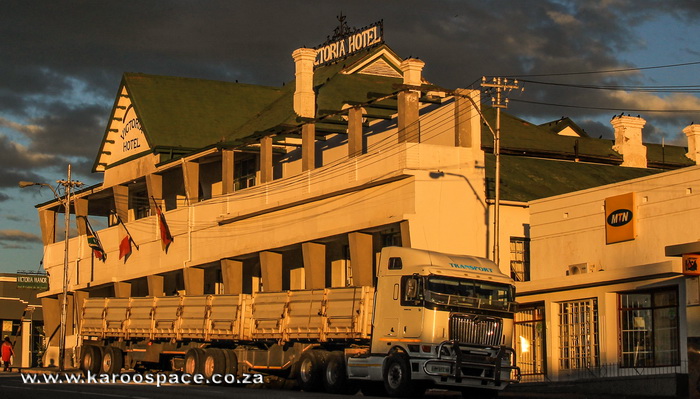 There’s always a story to tell on Market Street, where the venerable establishment on the corner transports you on a Victorian-era nostalgia trip, complete with groaning dinner tables laden with a Karoo lamb dish, venison with cranberry sauce and sugared pumpkin. 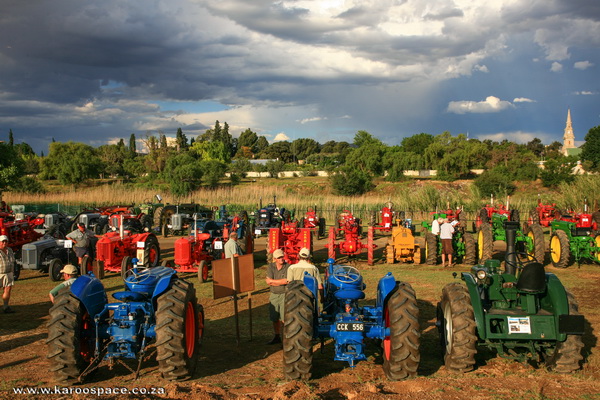 Showtime in Cradock arrives on a weekend in October at the height of summer.

The riverside showgrounds are abuzz with wandering farmers, families chewing on sosaties, well-groomed livestock on their annual town jaunt and, in pride of place, a truly elegant selection of horses on display.

The Cradock Agricultural Show is one of the oldest of its kind in the country. Running since 1864, it never skipped a year through all the periods of conflict: the Anglo-Boer War, WWI and WWII, with the Great Depression sandwiched between them. 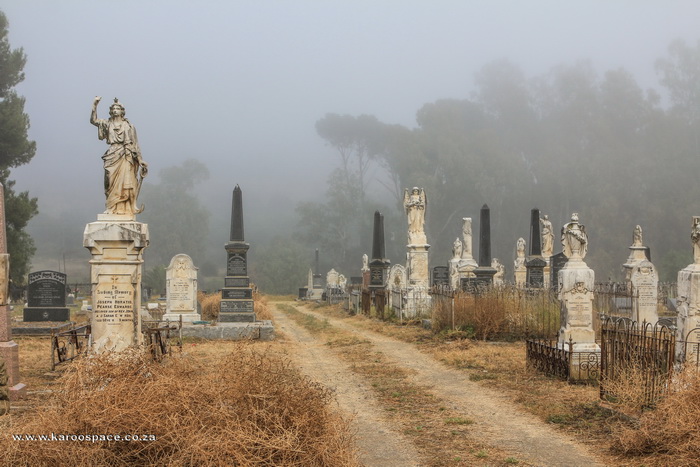 Should the dead souls of the Cradock Cemetery rise from their graves on a moonlit night and sit down together at a long table by the side of the Great Fish River, it would indeed be a feast of note.

Hosting the spectral supper would be Dr Reginald Koettlitz and his wife, Marie Louise. He died on January 10, 1916, and Mrs Koettlitz expired a scant two hours after him.

Read the inscription above his plinth:

“An explorer and traveller, surgeon and geologist to Expeditions North Polar and Abyssinia and with Scott to the Antarctic.” Enough said.

To his right would be General Pieter Hendrik Kritzinger, a major Boer warrior who led his British pursuers a devil’s dance through the Karoo Midlands.

To his left would be Harry Edwin Wood, the official Astronomer and Timekeeper for the Union of South Africa. He is also known for his discovery of a comet recorded as ‘1660 Wood’.

Somewhere down there is Peter ‘No-Wine-Please’ Sidey, buried in 1864 with the help of the Cradock Teetotal Society.

The remainder of the ghostly dinner party would include more than 70 British soldiers, a gaggle of nuns, four Cape Rebels (graves washed away in the 1974 floods) and look, here’s one Harry Potter, far from home, buried in Karoo soil. 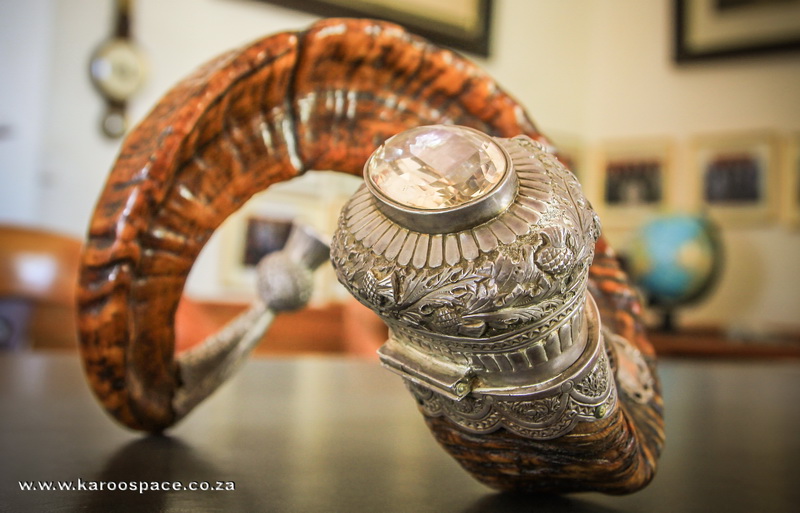 One of the most treasured items in the Cradock Club is a sheep’s horn. Fair enough, you might say. This is sheep farming country. What’s weird about that?

Well, the thing is that this horn comes from a Scottish Highland sheep. It is generously studded with silver and amethyst crystals and once contained a large dollop of really sneezy snuff. The snuff horn was donated to the club by the departing Sherwood Foresters after the Anglo-Boer War in 1901.

They also left behind a fabulous Burmese teak leather-topped table, which now has pride of place in the reading room of the 134-year-old gentlemen’s club. 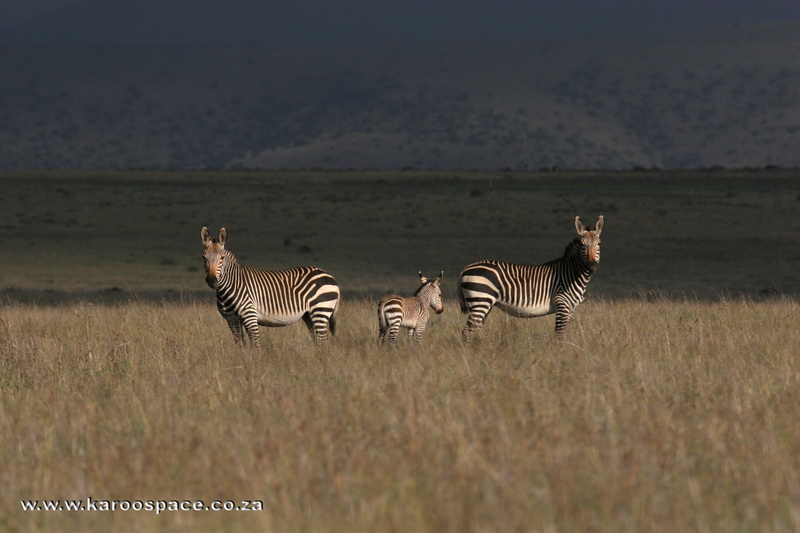 One of the first things you should do when visiting the Mountain Zebra National Park just outside Cradock is to climb out of your vehicle at one of the viewpoints and sniff the clean air.

Set among the bulky ironstone massifs of the Bankberg mountains, this park combines the serenity of a semi-desert with horizon-wide views of stacked mountain ranges that fade to mauve.

You’re in big sky country, and the feeling of being able to see forever is a major part of the Mountain Zebra National Park’s appeal.

The main manne here, of course, are the Cape mountain zebras for which the reserve was named. They make eye-contact with you and often pose heroically on a mountain ridge for that perfect late-afternoon photograph.