Here am I back in the mid-1980s with photographer Noel Watson behind the wheel, a bottle of Jose Cuervo between my knees and the road to Pietersburg in my sights.

Last night in some Rockey Street cockroach pit, an agency hack told me Pik Botha (then the world’s longest-serving Foreign Minister) would engage the Right Wing in its den, Pietersburg, tonight.

The hall where this minor Boer War skirmish will be performed is just around the corner from our hotel.

This story is a spit away from room service and a direct line. Before the age of smartphones and laptops and broadband, this is super hi-tech.

We get there and the Right Wing – guys in khakis, gals in crimplene, barefoot kids all about – are building up some kind of atmosphere.

The local Nats are inside the hall, busying themselves with flower displays and mike stands and grumpy stage curtains, all the while pondering on their Old Testament neighbours with the big fists outside.

Suddenly, the Right Wing gains entrance to the town hall and a fight erupts on stage. Lots of black Nat suits and AWB khaki milling about, yelling and shoving and ducking and punching.

Somewhere in their lizard-brain youth, these guys must have read my excellent article in last year’s October Scope (the one with Samantha Fox and her breasts on the cover), which dealt with the serious social phenomenon of dwarf-tossing.

This juggernaut trio has only one mission: throw the journos off the stage, far as you can. 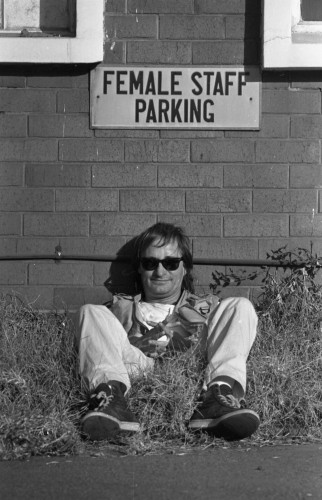 Compadre Noel Watson – “What are we doing here?” Pic by Trevor Samson

First to go is Jan Hamann, sparrow-sized photographer. He clears the first five rows of chairs, lands bravely under his Nikons and returns to the fray undaunted.

Then they find Noel, also a smallish type. He makes it over Rows A, B and C. Then it’s my turn.

“Hey, fellows! You gotta be joking!”

They are, indeed, not joking. They size my bulk up, as if I were a Bonsmara bull at auction. Both men know that picking up 100-kilos of tequila-fired, 100% Jo’burg Boy is not going to be a Sunday picnic on the banks of the Limpopo River.

But they are men who face livestock management issues every day, and to them I am nothing but a pesky bullock with a South African English accent.

However, they can only toss me as far as the trestle table with the red carnations artfully spread on white crocheted cloth, right in front of the stage.

The Martial Arts and Furniture Removal Division of the AWB would not approve of their efforts.

There Goes the Big Boy

And such is the spirit of camaraderie amongst the Southern African Press corps and its foreign brothers and sisters that Wim de Vos, ace cameraman for CBS, bends down and picks me up.

“Thanks Chris. That was great footage. Now I’m sure to make the early feed to New York!”

Then it’s teargas from the cops. Man, this party is never going to end. I hold on to the coral necklace of a 70-year-old pensioner lady as she leads me from the hall.

She, in turn, is holding onto somebody else. And so on, in a daisy-chain of gasping teargas victims.

This bizarre Waterberg Watusi, this weird snake dance, unites us all. Police teargas is not pleasant. You never get used to it.

We spot a young AWB woman crying because she caught a massive dose of teargas in both her eyes.

Her husband is holding her close, obviously trying to console her. The tighter he clutches, the harder she cries. He’s actually smothering her with tear gas residue.

Foreign Hacks to the Rescue

Finally, Noel and Louise Gubb, a very gutsy foreign photojournalist, go to her rescue. They pull out their Bic lighters and proceed to burn the teargas off her, which is the right thing to do.

Hubby, however, hates the media because that’s the brand of milk he was brought up on.

He is convinced Noel and Louise are trying to burn his wife at the Bic stake. He chases them off and goes back to hugging her. She goes back to crying again. Oh well.

We’re stumbling back to the Holiday Inn. Noel and I have collected punches in the melee. Our clothes are tattered and Watson’s on at me to have his broken flash unit fixed.

A man stops his bakkie in front of us. We see the AWB flashes all over the ass-end of the vehicle and on his broad shoulders. Uh oh. This is shotgun-to-the-head time. Cue Deliverance banjo break.

“Where you guys from?”

“Scope Magazine. But please don’t throw us around again. We don’t want to play anymore.”

There is silence in the night, broken by police sirens as they rush more units to the scene of the battle.

But instead of a beating, we get an apology. The man promises to ask his Beloved Leader, Mr Eugene Terre’Blanche himself, to replace Watson’s flash unit.

And then he invites us to a braai on his farm somewhere on the Zimbabwe border. And we gladly accept his offer.

Of course, we don’t go. But then, Eugene never sends us that flash unit, either…

This is a short extract from The Journey Man – A South African Reporter’s Stories by Chris Marais. Order the Print Edition HERE and the E-book edition HERE. 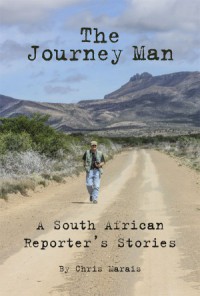